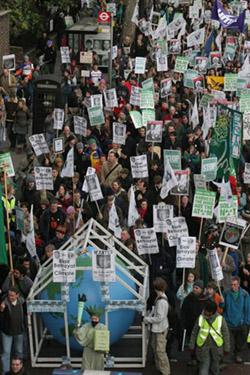 The Campaign against Climate Change brings people together to push for the urgent and resolute action we need to prevent the catastrophic destabilisation of global climate.

In 2001 the Campaign organised the Kyoto Rally in protest at Bush's rejection of the Kyoto treaty and has been organising the biggest mobilisations on climate in the UK since then. Since 2005 the Campaign has organised a yearly National Climate March at the time of the annual United Nations Climate Talks. This event brings thousands onto the streets of London to demand urgent action on climate every year 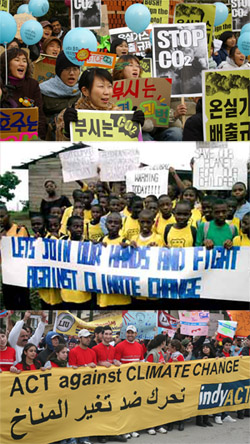 in Australia and in 2007, last year, more than 70 countries were involved - see www.globalclimatecampaign.org. We aim to build these demonstrations bigger and bigger year on year untill we have a tidal wave of global protest that will push world leaders to act.

Campaigning through the year 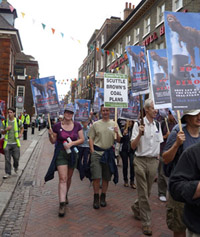 In the UK, as well as organising the National Climate March, the CCC mobilises people on climate issues all though the year. In 2008, for instance, we (amongst other things) co-organised a demonstration at Heathrow against a 3rd runway and aviation expansion (see here), we have organised the largest demo so far against unsustainable agrofuels (see here) and we have organised a 'No New Coal' march from Rochester to Kingsnorth on the first day of the Climate Camp (see here). Then in 2009 the battle for green jobs came to the fore with the closure of the Vestas wind turbine factory. We reacted to the closure by going there on the night the occupation started and holding a demo in the week that followed (see here).

These four events represent the the three major 'themes' of our climate campaigning at the current time.

Here in the UK the CCC directed its campaigning efforts for many years against the Bush administration in the US because it was the biggest block on any kind of progress towards such an agreement. At the same time we recognise that the UK is amongst the world's richer and longest-industrialised countries whose high-consuming lifestyles and consequent high current and historical emissions of carbon dioxide are the major cause of climate change which will impact hardest and most immediately on the world's poorest and most vulnerable communities. We recognise that a huge threat to the world's climate is posed by the rapidly growing economies of countries like China and India but we beleive that that the best way to tackle the problem, both in moral and pragmatic terms, is to set the best possible example here in the UK. Therefore whilst trying to encourage a very vocal demand for climate justice from all around the world - and the countries of the Global South in particular - through our international campaigning, we campaign for a program of rapid and radical emisions cuts in the UK backed by legislation in the form of an effective Climate Bill and for policies that will make those emissions cuts possible. That means policies on the three main themes mentioned above (Heathrow/aviation, Kingsnorth/new coal and agrofuels) in particular. 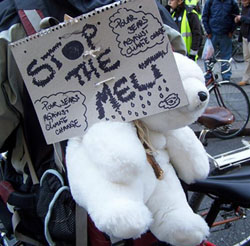 The Campaign against Climate Change essentially started with a demonstration in reaction to Bush's rejection of the Kyoto treaty - a definitive event in environmental politics - in Spring 2001. Although only 7 or 8 hundred strong this "Kyoto Rally" got a great deal of media coverage. In fact this demo was able to be organised at very short notice because the core of what became the CCC had already formed around a weekly picket at the US embassy which had been instigated directly after the Hague Climate Talks in November 2000. At these Talks the US had already demonstrated itself to be the major barrier to any kind of progress. Phil Thornhill from the Hackney 'Friends of the Earth' local group had attempted to organise a demo at the US embassy, failed, and started a lone vigil there instead. He was soon acompanied by others and although the constant presence was abandoned after two weeks a weekly vigil was inaugarated and there was even a demonstration of 80 odd at Bush's inauguration in January 2001 - staged mainly by members of Friends of the Earth and the Green Party.

After the Kyoto Rally there were further events that summer including a small but media-effective demonstration at Bush's first British visit and a 'March against Bush' just after the Bonn Climate Talks. After 9/11 climate change became a very difficult issue to instigate mobilisations around since the wars in Afghanistan and subsequently Iraq dominated in the world of political protest. The response of the CCC was to concentrate on a yearly "Kyoto March" around the anniversary of Bush's dumping of Kyoto. This involved a 20 mile march by a small 'hard-core' from ExxonMobil headquarters near Leatherhead to the US embassy. On the last few miles of this, from the Imperial War Museum park, the diehards were joined by the main demonstration party of several hundred or so. The Kyoto March was staged in 2002, 2003 (in the teeth of the just-declared war in Iraq) and 2004. 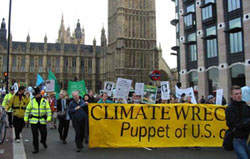 But already in November 2003 the campaign had made a breakthrough with a 1,000 + strong demonstration on the occasion of Bush's visit to the UK. This was in large part achieved due to good timing (the demo took place the actual evening that Bush arrived) but the CCC succeeded in adding climate to the media agenda, despite the inevitable dominance of the Iraq war issue. Michael Meacher MP and Tony Juniper and Stephen Tindale, the Directors of FOE and Greenpeace respectively, spoke at this demo. 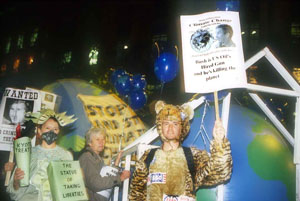 October 2004 saw the European Social Forum come to London and this saw the beginning of the CCC's attempts to network internationally. The effort was focussed on organising an international demonstration (synchronised demonstrations around the world) for the coming into force of the Kyoto Treaty in February 2005. CCC also held a 'Global Funeral March' marking Bush's re-election in November 2004. The international effort resulted in a handful of small demonstrations around the world on Febraury 12th 2005 - Athens, Brusells, Kyoto in Japan - but laid the foundations for the first Global Day of Action later in the year. In the UK more than a thousand demonstrators took the flags of all the nations that had ratified Kyoto to the US embassy in a spectacular demonstration. The preparations for this demo included meetings around the country that saw the beginning of CCC's local group network. 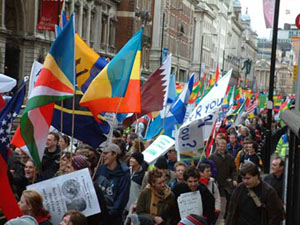 An international effort required an international focus so from 2005 the CCC focussed it main efort on the annual UN Climate talks when world leaders are supposed to be making critical decsions to prevent climate catastrophe. December 3rd 2005, the Saturday midaway through the Montreal Climate talks, saw demonstrations in more than 20 countries, on the first Global Day of Action on climate. In the UK the CCC had used the Edinburgh (Gleneagles) G8 in July to build interest and organised a hugely successful, breakthrough, demo in London with around 10,000 participants. Tens of thousands demonstrated in Montreal itself. In Australia the CCC had failed to catalyse anything in February but the London demo had achieved a lot of Australian media attention - now in December there were some thousands of demonstrators around Australia. Around 4,000 demonstrators, meanwhile, took to the streets in Turkey. 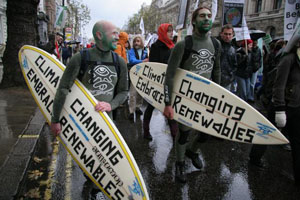 2006 saw the formation of the Stop Climate Chaos coalition of NGOs in the UK. They now took up the idea of a large event in London at the time of the UN (Nairobi) Climate talks - and they had the resources of several large NGOs to spend on this. The CCC joined with them in a common efort but we retained our own style of doing things by organising our own rally at the US embassy followed by a march to join the SCC event in Trafalgar Square. The march turned out to be massive - another huge success - and we influenced the feel of the overall event which nevertheless came across as a single event to the general public. The Global Day of Action, meanwhile had really taken off with more than 30 countries participating this time - including an amazing 100,000 or so in 'Walks against Warming' around Australia (about 40,000 at demos in Sydney and Melbourne). 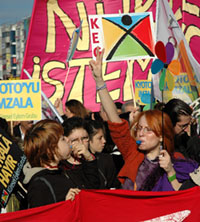 2007 saw the CCC demonstrating at the gates of ExxonMobil HQ in the Spring. The summer saw a second CCC 'Climate Conference' at the London School of Economics - the first had taken place in 2006, with around 500 participants. The National Climate March in London this year took place in heavy rain and this time the SCC coalition was not involved - leaving the CCC to organise the event on its own once again. Nevertheless numbers held up with 7 or 8 thousand braving the weather and good media coverage. Meanwhile the Global Day of Action had really taken off with more than 70 countries involved and demonstrations of thousands in Germany, Taiwan, Canada, Nepal, Turkey, Belgium, Greece, the Lebanon ... and more. 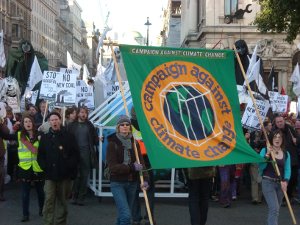 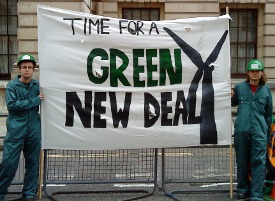 In 2009 the Campaign held three demonstrations early in the year: a No Third Runway demo in January, a demo against unabated coal power stations in March, and a Climate Emergency iceberg demo outside the ExCeL Centre at the time of the G20 summit. Following that was a Climate Emergency Parliament event in mid-July. Then, the Vestas dispute and the fight for Green Jobs came to the forefront of the campaign until the London Public Forum in the lead up to the Climate Emergency Rally on December 5th.

In 2010 the CCC wasted no time in putting pressure on the newly elected government to cut emissions, with an overnight candlelit vigil barely a week after the election. We also had a very successful public meeting discussing the rise of climate change scepticism in addition to demonstrations in London and Manchester on the same day to symbolise the insanity of domestic flights, and a demo in Portland at the site of a proposed new agrofuel power station, rounded off by the National Climate March in December at the time of the Cancún climate talks.

Details of all our past events can be found in our events archive.