Trump and May, Climate Disaster: Rise Up!

In the UK, May's government are continuing a programme of climate action cut-backs, while pushing through damaging infrastructure such as fracking and a third runway at Heathrow.

In the US, Trump is slashing funding for climate science and preparing to force through disastrous projects such as the Keystone XL and Dakota Access Pipelines.

Thanks to all who turned out to our protest - calling on Theresa May to stand up for our climate as hundreds of thousands protested in the US about Trump's climate-wrecking. Find out more about the UK's less than perfect record on climate change in the video below.

Read coverage of our protest in DeSmogBlog with pictures of the day here and here.

And of course this was just part of a global action with hundreds of thousands on the streets in the US and other countries.

Our fantastic speakers highlighted ways you can get involved in campaigning over the next few months. In case you missed anything, here are a few of the events coming up...

4 / 6 May: Hear from one of the activists at Standing Rock. Thomas Lopez Jnr of the International Indigenous Youth Council will be attending film screenings - 4 May in Liverpool, 6 May in London.

11 May: London screening of The Bentley Effect, a film about the battle against unconventional gas extraction in rural Australia.

13 May: 'Clean up our councils: kick out fossil fuel investments!' Coming to a council building near you - join Divest London on their tour with giant puppets! Find more UK actions happening during the Global Divestment Mobilisation week (5-13 May)

14 May: 'Oily cashmob' at the British Museum

We are calling on Theresa May (and candidates from all parties in the coming election) to take a stand for the climate, whatever Donald Trump tries to do. In particular, the UK government must: 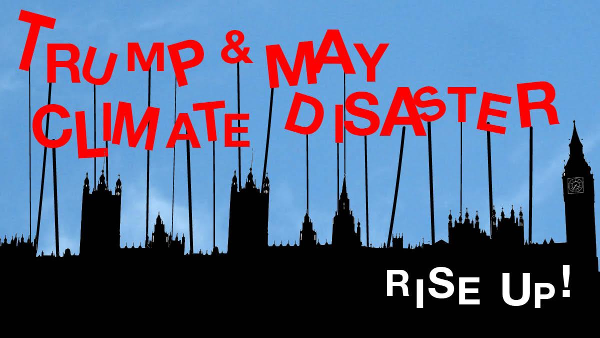