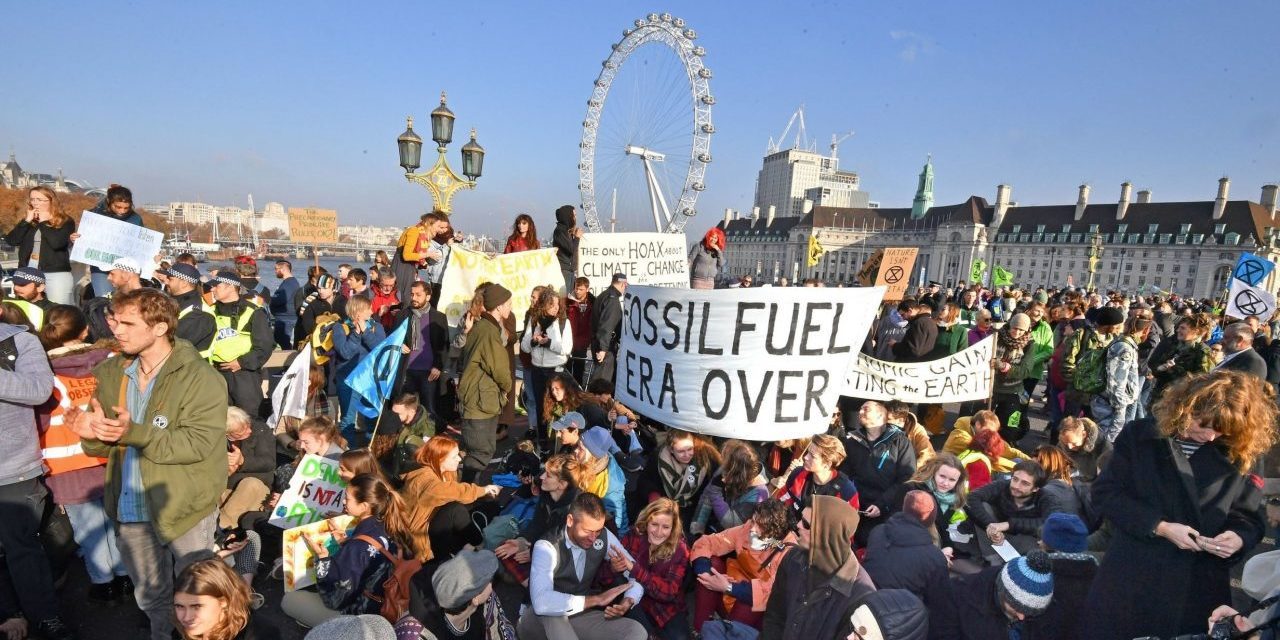 From blocking five major London bridges last November, Extinction Rebellion are scaling up with plans for major disruption in the capital for a fortnight from 15 April. Participants are invited to bring tents to camp out in Parliament Square and other locations.

The Friday before the action, April 12th, will be the UK's third national school strike. During the fortnight there are expected to be actions in several major cities in countries where Extinction Rebellion is active - it's billed as 'International Rebellion'.

They are calling on the government to meet to seriously discuss Extinction Rebellion's three demands:

First up - disruption. Groups from around the country will be blocking roads by swarming or sit down protests. There will also be a range of other activities, with performances, visual art, learning sessions and tours. There will be links with other campaigns, for example focusing on the food system on 17 April, which is the International Day of Peasants' Struggle. Many events will be publicised closer to the time / will depend on police and government response to the protests, so you'll need to check updates, e.g. on Twitter and Facebook.

They are expecting a large number of arrests from the direct actions, but there will be opportunities to take part without risking arrest. Volunteers are being sought, particularly stewards and trained first aiders.

Anna, an Extinction Rebellion member and SOAS student, argued that first-timers should not be put off. "Everybody is welcome – only 1% of people in Extinction Rebellion are up for arrest, so 99% of people take on roles such as: volunteering in the office, at the Arts Factory, helping with social media, press releases, making videos, and speaking at events. Therefore, whatever your interests are, there is a role for you in the movement! It will be creative, fun and inspiring. I have loved every second of being involved in such an exciting and effective organisation, and they really feel like family to me."

More information is available here or from your local branch of Extinction Rebellion. Update on locations

Many Campaign against Climate Change supporters will be taking part in various actions, and a heads up to families - we'll also be out and about with an opportunity for children to send a crucial climate message - look out for the paper boats!

On 25 April, during the second week of action, the Campaign against Climate Change will be holding a public meeting. This will be an opportunity to hear from people who are finding new ways to tell the truth and act on the climate emergency - from Extinction Rebellion but also those getting their local councils to pass climate emergency declarations (and act on them!), work in trade unions, campaign for a Green New Deal, reach out to MPs and more. In this time of huge political uncertainty, we have an opportunity to refocus attention on the planetary crisis and social justice - what practical actions can we take right now to help that happen?