We are in a Global Climate Emergency.

The main reason for this is that the destabilisation of global climate has progressed much more quickly than scientists thought.

This has had the result that the plans developed to deal with it are now insufficient, being based on out of date scientific projections.

That is the case even when those plans themselves are proving fantastically difficult or impossible to implement due to a failure to secure the necessary political support at national or international level. In fact all along there has been strong political pressure to minimise the scale of the threat and what needs to be done. This means that many of the assumptions made have been optimistic and it has too often been forgotten that we are dealing with a range of probability, where the scenarios based on less optimistic assumptions have been largely ignored. Unfortunately in many cases it seems to be the more pessimistic assumptions that are proving true.

International policy, such as it exists, and the national policies of many individual countries are based on the reports of the IPCC – the Intergovernmental Panel on Climate Change. This body represents the consensus of a huge body of experts, but establishing that consensus is a process that not only tends to favour the cautious and conservative but necessarily takes a very long time. There are long periods between new reports and the science used in the reports may already be somewhat dated even when the IPCC report first appears. That means that in a situation where the science is evolving and changing very rapidly the primary scientific report on which policy is based can often be out of date. 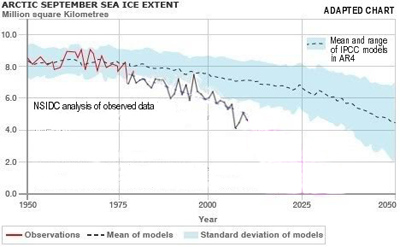 More broadly the over-optimistic assumption underlying many classic projections can be characterised as the exclusion of any positive feedback processes. The assumption has been one of a gradual or ‘linear’ rise in temperature when the geological record suggests that ‘non-linear’ progression has been closer to the norm, in previous episodes of rapid global temperature change. This means that the angled line on the graph is not one that is more or less straight but one that steepens abruptly when certain thresholds or “tipping points” are met. The steepening is due to the triggering of ‘positive feedback’ effects. Examples are the drying out and burning of forests which thereby release more carbon into the atmosphere causing the temperature to rise yet more quickly again, or the exhaustion of the capacity of soils or the sea to absorb carbon leading them to release it instead, causing an increase in the rate of warming once again. At a certain point these natural processes could become so strong that they are putting more extra carbon into the atmosphere than humankind itself is directly – at that point the situation would be completely outside our control. Meanwhile the task for planners is redefined – it is not about how to keep that line on the graph from rising too steeply, it is about not letting it on any account reach a certain level – when it will suddenly shoot upwards. The situation we are in is not so much that of the thrifty householder who simply needs to plan their carbon budget wisely and well ahead – but rather of the man staggering though a minefield in the dark: he does not know when he might make that fateful step that will obliterate him, he only knows that the more walking he does the more he is likely to make it. The situation, in other words, is much more uncertain and dangerous than generally portrayed.

There are two ‘positive feedback’ processes which are particularly relevant in the context of the much-quicker-than-predicted disappearance of the summer arctic ice. One is the loss of albedo effect. The white arctic ice reflects heat away (albedo effect) but the dark waters exposed when it melts would absorb the heat instead – thereby increasing global temperatures. The second is the melting of the perma-frost in Northern latitudes. The permafrost contains around twice the amount of greenhouse gases (carbon dioxide and methane) currently in the atmosphere: it would therefore triple the level of atmospheric green house gases if it all melted. Warmer waters in the Arctic sea clearly have the potential to warm the surrounding land masses and the permafrost they contain.

There is yet another third ‘positive feedback’ process which could be relevant: underneath the oceans are the remains of organic matter from dead plankton or washed into the sea by rivers over the millennia, degraded by bacteria and frozen to form crystalline ‘methane hydrates’. These are kept stable by a mixture of temperature and pressure but in the relatively shallow, cold, Arctic sea the former is especially important. An increase in temperature caused by a warming of the waters could possibly release large quantities of methane from the hydrates: while lasting not nearly so long in the atmosphere, methane is a greenhouse gas twenty times as powerful as Carbon Dioxide. It has been suggested that the very rapid rises in atmospheric carbon and temperature associated with 'extinction events' such as that of the End-Permian (which wiped out 95% of life on Earth as it then existed) could only have been caused by massive releases of methane from the ocean beds. In 2008, for the first time, methane was found escaping – to date in relatively small quantities - from the Arctic Ocean.

Looking no further than a series of possible knock on effects from the observed acceleration of Arctic sea ice melting, we can see a potential chain of events that could trump the careful calculations of the IPCCC and render many of our plans to gradually reduce emissions worthless.

All this means there is an overwhelming need to do as much as we can NOW. Securing real effective action in the short term – ideally crash programs of emissions reductions or ‘decarbonisation’ – are more important than ambitious programs for the more distant future. The fact is that by the time that future arrives the situation may have changed dramatically and we will have to adapt to a whole new set of circumstances. The only thing we can be sure of is that the adaptations we have to make then will be all the more drastic and traumatic in proportion to how little we manage to achieve now.

We do not just have a huge but predictable threat that we need to do big but measurable things to deal with - we have rather a current state of global climate emergency in which targets are rapidly becoming meaningless, in the face of an overwhelming need simply to do as much as we possibly can as fast we possibly can.

And there is no big problem over what we could or should be doing right now, either internationally or nationally – there is just a lack of will. The latter (‘national’) category is the easier because it does not require the agreement of other countries and there is plenty that we could be doing in the UK straight away – the list starts with things we should not be doing like building new coal-fired power stations, increasing aviation capacity, or expanding unsustainable agrofuels but goes on to embrace a recession-busting ‘Green New Deal’ which includes an extensive program of energy efficiency and home insulation and a renewable energy revolution involving a huge expansion of wind, wave, tidal, solar and other sources of carbon free energy. This would go hand in hand with a massively ramped up public information campaign on the gravity of the climate crisis and a sustained campaign to change attitudes and behaviour in line with that.

The Climate Emergency should be the overriding priority of every politician and to which all available human and material resources should be immediately directed. Those in power, however, are not currently acting with anything approaching the degree of urgency and resolution required by the circumstances – until they do it is the duty of each and every one of us to do our utmost to influence them to do so. If they will not declare a Climate Emergency and act accordingly then we have to do everything possible to communicate that sense of emergency to others and to push for the action that it demands.

For a more general background about the Climate Threat see here.