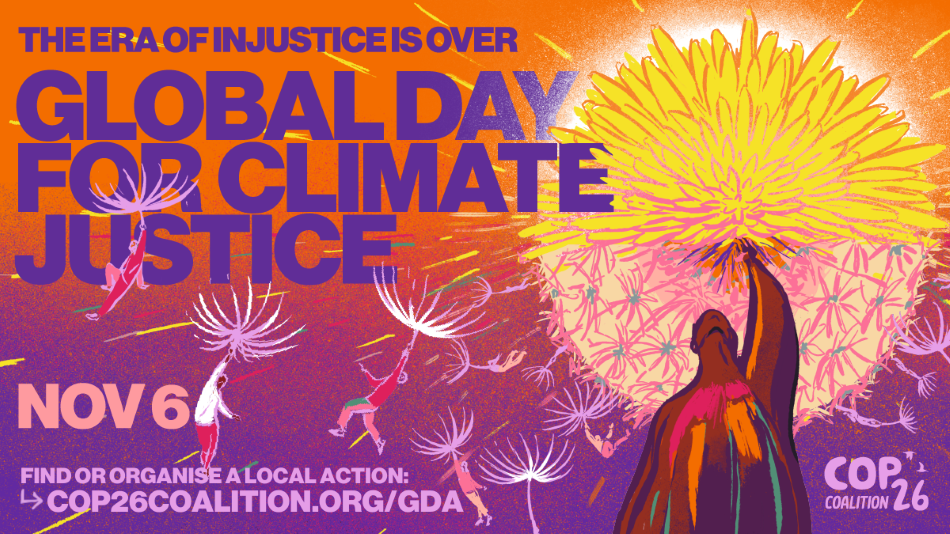 COP26 is coming to Glasgow

Campaign against Climate Change is part of a civil society coalition coming together to mobilise mass action around COP26. Because of Covid,there will be (alongside a massive demonstration in Glasgow) a callout for mobilisations in cities and towns around the UK and across the world on 6 November. There will also be a global climate strike day on 5 November.

Climate activists around the world have been raising the alarm about what has been called "the most exclusive COP ever". Delegates have been left waiting both for vaccinations promised by the UK government and even for information about arrangements. Faced with calls for COP26 to be postponed, the UK government have promised to pay for quarantine hotels. But many government delegates, civil society campaigners and journalists, particularly from Global South countries, will still be excluded. Even in 'normal' times, there is an imbalance of power with governments of wealthy countries dominating. What will these, even more unequal, climate talks mean for decisions on issues such as climate finance, loss and damage and carbon market rules, and the impact on the world's poorest?

It's more important than ever that UK activists get onto the streets and call for for climate justice.

The Global Day of Action will be on Saturday 6 November. As well as a massive demo in Glasgow, we need large protests in cities and towns around the UK. Find your local hub here

As well as the march in Glasgow, there will be big demonstrations in major cities around the country. To find your nearest and get in touch with the organisers to help out, check out the map here. The map's not full yet though. If you can't get to one of the bigger events, set up a rally in your own town and register it.

If you'd like to get involved with flyering in London specifically, drop us a line at info@campaigncc.org

Climate Strike Day on 5 November
Fridays for Future Scotland are calling a climate strike on 5 November and we know some student groups south of the border are also taking action on that day, we encourage you to support if you can.

Raise your Banners on 1 November
An invitation to be artistic - or just get your message across however you can! Make a banner calling for climate justice and hang it outside your house or workplace on Monday 1 November. Banners can also highlight other struggles, against airport expansion or air pollution or for migrant rights. You can also send your banner to be displayed in Glasgow. Find out more

People's Summit, 7-10 November
The COP26 Coalition are also organising a People's Summit, which can be joined online or in person in Glasgow. Sessions will hosted by a wide range of organisations, with topics ranging from subvertising to saving the Amazon and indigenous rights, from farming and soil carbon to the military's contribution to climate change. You can register and explore the programme.

The COP26 Coalition is also looking for volunteers to help with stewardng for large actions happening in Glasgow and London - as well as at several locations across the country. To volunteer as a steward, sign up here.

Find out more about COP26

The COP is an annual summit of all the countries which are part of the UN’s climate change treaty, the UN Framework Convention on Climate Change or ‘UNFCCC’. There are 197 members of this process and they are known as ‘parties’ to the treaty. The Conference of the Parties, or COP, is when member countries meet annually for 2 weeks to - in theory - tackle the urgent climate crisis devastating our planet. But the '26' in 'COP26' means that this will be the 26th such event. Young climate campaigners were not even born when this process started, and yet our global addiction to fossil fuels has still not been curbed.

In 2015, in Paris, a significant step was taken where all the member states signed up to an agreement to aim to limit warming to no more than 1.5C above pre-industrial levels (avoiding some of the most catastrophic impact, but still harming many people and ecosystems). However, the agreement involved very little in the way of practical commitments to decarbonise or to transfer wealth from richer, heavily polluting countries to poorer nations who are suffering the impacts of climate change. However, the pledges that were made would set our world on a course not for 1.5C warming, but a deadly 3.5C or 4C.

So the usefulness of the Paris agreement depends on regularly increasing (ratcheting up) these commitments, and on taking action right now to address the crisis, not just setting long-term targets.

But governments around the world have comprehensively failed to take real action on the climate crisis. Instead of breaking our addiction to fossil fuels, and acting with the urgency the climate crisis needs, rich countries hide behind ‘net zero’ pledges which depend on removing CO2 from the atmosphere on an unfeasible scale. As host, Boris Johnson’s government should be leading the way, but the UK is way off track to meet its climate targets, while international aid has been cut dramatically.

The COP26 Coalition held a series of six webinars - Boiling Point: Everything you wanted to know about international climate negotiations - you can find the videos here.

The November 2020 global gathering, From the Ground Up, discussed many of the important issues in more depth. Some of the session recordings are available on YouTube and several more on Facebook