Demonstration against subsidies for agrofuels at DECC in Whitehall 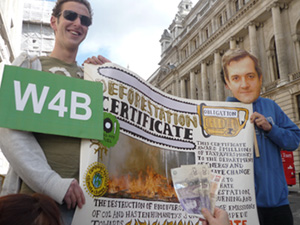 The demonstration was preceded
by a photo-op and handing in of
5,000 signatures (collected by Lush
Cosmetics Stores) against agrofuel subsidies at 1.00 pm.

Our demonstration was at DECC, the government Department of Energy and Climate Change, because they are responsible for classifying 'agrofuels' as a 'renewable energy' and supporting the rapid increase in their use with "Renewable Obligation Certificates" . See above our spoof photo-op where Chris Huhne, (Secretary of State for Energy and Climate Change) is handing a "Deforestation Certifcate" to W4B the company that intends to build an agrofuel power station at Portland, site of our National Demonstration against Agrofuels -  and also Bristol. 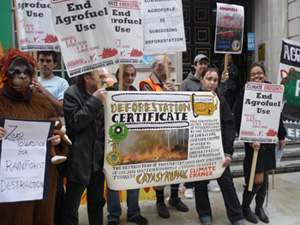 DECC staff leaving the building were leafleted - including Chris Huhne himself who had one pressed into his hand. And Deepak Rughani from Biofuelwatch, plus Peter Deane, Phil Thornhill and Maryla Hart briefly addressed the crowd.

We’ve made a short MP3 of the speeches which you can download here.

Following the demo at 7.00 pm we held a Public Meeting at SOAS   entitled “How we can stop ‘Agrofuels’ undermining the fight against climate change.”  After a brief introduction to the issue from Phil Thornhill, CCC Coordinator,  Andrew Butler from ‘NOPE’ (‘No Palm Oil Energy”) the local campaign group down on the Isle of Portland, filled us in on how the campaign against a proposed agrofuel power station down there had started and evolved, as well as recounting his own experiences encountering the impacts of agrofuels on indigenous people in Indonesia. Next Kenneth Richter from Friends of the Earth, who was just back from talking to anti-agrofuel campaigners from all over Africa in Ghana prduced some moving testimony to the human suffering caused by agrofuels there - including film footage of an interview with one of the people affected. Next Maryla Hart, on behalf of Biofuelwatch gave a rundown on current developements including the wheres and wherefores of the current rash of agrofuel energy power stations sweeping the country.

The meeting concluded with a lively discussion. For more about 'agrofuels' see also our Biofuels page.