The funders of climate disinformation 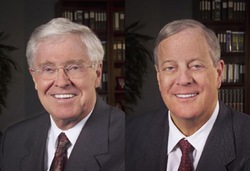 Brothers Charles and David Koch own the controlling shares (84%) of Koch Industries, a massive conglomerate ranked as the second largest, privately owned company in America.  This wealth is based mainly on fossil fuels. For instance the conglomerate operates oil refineries in Alaska, Texas, and Minnesota, and controls some four thousand miles of pipeline  - although it also owns other products and brands such as Lycra. As a result of its huge involvement in fossil fuels it has been called "one of the primary sources of carbon pollution in the United States".

This vast conglomerate has a deplorable record for breaking environmental regulations and illegal pollution. A Koch Industries subsidiary paid a landmark $35 million penalty in January 2000 for its  three hundred oil spills in Texas and five other states. There is a catalogue of other fines paid by Koch industries for assorted environmental violations and, for instance, stealing oil from Federal and Indian land. The Koch brother have not held back from using their political influence to evade such penalties: in April 2001 after Koch helped to elect George Bush in 2000, the Bush Justice Department abruptly settled a criminal case with $350 million in penalties that Koch faced for discharging toxic chemicals from a refinery in Corpus Cristi, Texas.

It might come as no surprise then that the Koch brothers devote a considerable portion of their enormous income to funding a political campaign against every kind of environmental or other regulation that might get in the way of their huge profits. In fact the Koch brothers disguise this with a smokescreen of philanthropic donation to prestige institutions like the Smithsonian but they have also used their money to create an extensive network of think tanks, foundations, lobbyists and tame politicians which has been called “the Kochtopus”.

In fact alongside this crude use of political influence to inflate their personal fortune the Koch brothers have a strand of ideological fanaticism that they may have inherited from their father, Fred C Koch a virulent anti-communist.  In 1980 David H. Koch was a vice-presidential candidate for the extremist Libertarian party. Since then the brothers have given up overt politics but doggedly supported Libertarian causes – which just happen to coincide with the interests of their industrial empire in pushing back regulations – by more covert means.

The list of right wing and free market groups they have used their vast fortune to support is endless but it includes the Cato Institute which Charles cofounded in 1977, the American Enterprise Institute, the George C Marshall Institute, the Reason Foundation, the Heritage Foundation, the Manhattan Institute and Americans for Prosperity, founded by David Koch himself and which spent $40million for the 2010 Congressional elections alone.

The “Kochtopus” has been involved in undermining every kind of environmental progress but in particular it has opposed climate change legislation, for instance  in New Hampshire. and in California where it backed the infamous Prop 23 which threatened (but failed) to push back climate change legislation  In fact a Greenpeace report in 2010 (Koch Industries: Secretly Funding the Climate Denial Machine) found that they are now the leading funder of climate change disinformation, outdoing even ExxonMobil. A follow-up report in 2011 found that the Kochs are still spending vast amounts of money opposing bills to control pollution, most notably supporting Proposition 23 - a move to abolish laws controlling greenhouse gas emissions until unemployment fell below a certain level.
Rolling Stone magazine places them second on a list of politicians and execs blocking progress on climate change, exposing David Koch's claims that global warming is good: "The Earth will be able to support enormously more people," he says, "because a far greater land area will be available to produce food."

Describing their political activities in support of their corporate agenda and right wing causes Charles Lewis, founder of the Center of Public Integrity - a watchdog group was quoted as saying: "There's no one else who has spent this much money. The sheer dimension of it is what sets apart. They have a pattern of lawbreaking, political manipulation, and obfuscation. [...] They are the Standard Oil of our times."

Jane Mayer, meanwhile, has written a landmark article for New Yorker magazine which describes the critical role they have played instigating and funding the Tea Party movement, especially through their front group ‘Americans for Progress’  George Monbiot describes  the Tea Party as the way the Koch brothers have found to  "persuade the people harmed by [their] agenda that it's good for them."

Center for American Progress:
The Koch Brothers: What You Need to Know About the Financiers of the Radical Right
www.americanprogressaction.org/issues/2011/04/pdf/koch_brothers.pdf

ExxonMobil has a long history of funding climate denial, and has given in total around $23 million to organisations aiming to undermine climate science. The company was created in 1999 with the merger of Exxon and Mobil. Both companies who were already active in campaigning against climate change legislationas part of the Global Climate Coalition. In 1997 the Coalition sponsored the Global Climate Information Project, (GCIP). The GCIP ran an advertising campaign in the USA against the Kyoto agreement, reported by the Los Angeles Times to have cost $13 million.

In 1998 Exxon helped plan the American Petroleum Institute’s Global Climate Science Communications Action Plan. This recognised that economic reasons for refusing to act on climate change would not be as effective as undermining the science. Drawn up before climate negotiations in Buenos Aires, the plan stated:
“Victory will be achieved when:
... Average citizens understand (recognise) uncertainties in climate science
... Those promoting the Kyoto treaty on the basis of extant science appear to be out of touch with reality"
Part of the strategy was to enable decision makers to raise “such serious questions about the Kyoto treaty’s scientific underpinnings that American policy makers not only will refuse to endorse it, they will seek to prevent progress towards implementation”.

This focus on the science has been vital to the success of the campaign by vested interests to prevent actionon climate change. There are marked similarities with the tactics tobacco companies have used in the past, as detailed in the report on ExxonMobil, Smoke, Mirrors and Hot Air, by the Union of Concerned Scientists.

The Greenpeace report, Exxon’s Weapons of Mass Deception, shows the close links that ExxonMobil had with the Bush administration, funding political campaigns and lobbying against the Kyoto treaty. In April 2002 Dr Robert Watson was removed as chair of the IPCC, following concerted lobbying by the Bush administration. A leaked memorandum to the White House shows ExxonMobil recommending his removal.

Under pressure, ExxonMobil conceded in its 2007 Corporate Citizenship Report, "In 2008 we will discontinue contributions to several public policy groups whose position on climate change could divert attention from the important discussion on how the world will secure energy required for economic growth in an environmentally responsible manner."

However, this funding has clearly continued. In 2009 ExxonMobil gave around $1.3 million to at least 24 organisations known for working to create doubt about global warming. This is a reduction from the peak funding in 2005 of over $3.5 million, but includes, for example $100,000 to the Atlas Economic Research Foundation, co-sponsors of the 2009 conference of leading climate sceptics entitled "Global Warming: Was It Ever Really a Crisis?". The web of funding can be difficult to unravel, for example the Atlas Foundation in turn supports more than 30 other foreign think-tanks that espouse climate change scepticism. Greenpeace has mapped some of the organisations and individuals linked to Exxon with an interactive tool.

Key ‘sceptic’ scientists receive funding from multiple sources. For example Dr Willie Soon is most famous for his influential, although thoroughly debunked, paper with Sallie Baliunas attacking the ‘hockey stick’ graph of global temperatures, funded by the American Petroleum Institute (API).In 2007 Soon co-authored a a ‘viewpoint’, published in the journal Ecological Complexity  that stated that polar bears were not under threat from global warming and that Arctic sea ice decline was less severe than had been thought. As a ‘viewpoint’, this was not peer-reviewed but has become a key reference for those arguing that polar bears are not under threat from climate change. This piece of work by an astrophysicist (hardly the most relevant field to polar bear ecology) was funded by ExxonMobil, API and the Charles G Koch Charitable Foundation. Dr Soon’s work and funding has been detailed by Greenpeace (more here, also criticism of the science).

The American Enterprise Institute, also funded by ExxonMobil, sent letters to scientists and economists in 2007 offering $10,000 for articles criticising the 2007 IPCC report. Recent analysis by Carbon Brief found that of the ten most referenced authors in a list of papers alleged to support climate scepticism, nine had funding links to ExxonMobil.