Shale gas and fracking in the UK and worldwide

Find out more about the current fracking situation in the UK and at a global level.

Cuadrilla Resources, a US private equity backed firm, began exploratory drilling at the first of several test wells at Preese Hall Farm, Weeton in August.  Details of the exploratory drilling for shale gas near Blackpool, whereby 1,200m3 of highly pressurised chemically refined water is pumped thousands of metres underground, are to be kept secret until 2015.  This 4 year privacy period, a normal practice for oil and gas exploration companies, is intended to protect their commercial opportunity. Issues of water contamination from hazardous substances remain significantly unregulated by the Environment Agency who appear to have performed only superficial investigations into fracking techniques at the Weeton site.

Residents have formed a campaign group against fracking in Banks.  Phil Mitchell of the Blackpool Green Party gave a presentation on the impact of fracking near Blackpool, in which he described health concerns of local residents, and also the possible links to minor earthquakes, which has led to the temporary suspension of the operation there, while those links are fully investigated. The residents established an action group, Ribble Estuary Against Fracking (REAF).

Cuadrilla began boring experimental drill holes on 22nd August provoking public controversy over water supply contamination and association with minor earthquakes in the Blackpool area.  Rock examinations are now underway to test whether a commercial drilling operation is worth their while, but Mark Miller, the company's chief executive, says they are feeling confident.

Keep up to date on all Cuadrilla and REAFs activity at http://reafg.blogspot.com/

The Mendip Hills are the latest to face a fight against fracking in the UK.  The charming Mr Gerwyn Williams of Coastal Oil and Gas/UK Methane attempts to put our minds at rest by saying “I know there’s been a lot of controversy over fracking shales, but if you go by the government select committee’s report, and the Environment Agency comments, then it is quite safe.” If you don’t agree with Mr Williams then please support ‘Get the Frack Out of the Mendips’ at their Facebook page. With massive water sources beneath the Mendip Hills supplying cities of Bristol, Weston-super-Mare and Bath it is essential they stay uncontaminated by fracking fluids. In addition, the Mendips are naturally interlaced with a large amount of fractures making them more susceptible to earth tremors as experienced around Blackpool.

Campaigners are objecting to plans to explore for gas on farmland in Kent, which they fear will lead to fracking on the site. Coastal Oil and Gas Ltd, already involved in unconventional gas extraction in Somerset, wants permission to drill an exploratory borehole at Woodnesborough to test coal and shale for gas.  Planning application has been requested for a 12 week permit to test coal, lower limestone shale and associated rock strata for extraction viability in the future.

Following a vote by the lower house of parliament passing the Senate in June, France became the first country to ban hydraulic fracturing. WWF welcomed the decision and urged the UK Government to follow their lead.

Earlier this year, French oil giant Total turned to the Lublin basin in Poland in a joint venture with US major ExxonMobil two days after France voted in favour of a ban. Poland has the largest potential for unconventional shale gas production in Europe and even stands to become a significant gas exporter as Poland’s state gas company PGNiG announced its first test drilling in Gdansk in August.  What drives the Polish demand for shale gas is that it removes reliance from Russian imports and allows for greater energy independence. Total also has two exploration permits for shale gas in Denmark and six in Argentina. 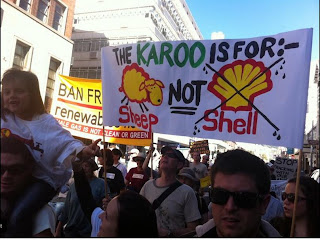 The South African fracking moratorium has been extended by another 6 months by Mining Minister Susan Shabangu after continued doubts over the safety of the process. This extension follows an initial shale gas drilling moratorium imposed by the country’s Mineral Resources Department in February. The Treasure Karoo Action Group have produced a hip-hop music video entitled ‘Frackattack’ aimed at talking to young people about the risks involved with fracking. Sign their petition to stop fracking in the Karoo region.

New York is home to a large piece of the Marcellus Shale, a massive formation believed to be one of the richest natural gas deposits on the planet.  The NYS Assembly passed a one-year ban on new drilling permits that would run through to June 2012, replacing the current ban which expired this summer.  Governor Andrew Cuomo is now expected to lift the moratorium in New York State after the Department of Environmental Conservation announced that it recommends the drilling method be allowed.  Sign the petition telling Governor Cuomo not to lift the ban.

Hundreds of New Yorkers hit the streets on 1st April as part of the 2011 Hydro-Fracking Day of Action pushing for clean water, not dirty drilling.  Read the press release and check out photos from the day.
New Jersey joins New York as the only two US states to place at least a temporary ban on fracking.  But NJ Governor Chris Christie also vetoed legislation that would permanently ban the process.

Despite dangers and repeated explosions, fracking in Pennsylvania continues unabated and untaxed.

See here on how to take action on American fracking.