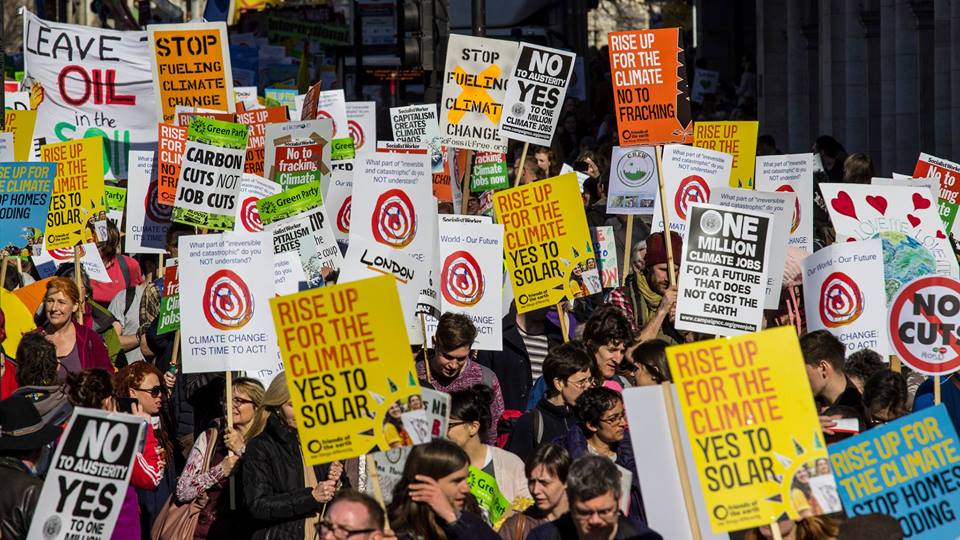 We are calling for the UK government to act on climate change. Not just to do something – to do enough to avoid climate chaos. This means investment not in new fossil fuels but in renewables – massive amounts. It means saving energy by insulating and converting all homes and all public and private buildings, and a shift from cars to public transport. It means a dedicated workforce to create this infrastructure – one million climate jobs. And it means the UK supporting a global agreement to cut warming emissions of all kinds, speedily, with fairness and justice.

As we expected, despite media hype, the deal made in Paris fell far short of what was needed to avoid catastrophic climate change (more detail on what was actually agreed in Paris here). But out on the streets there was determination to fight on as thousands of activists from different countries came together, challenging corporate greenwash, "CO2lonialism", and an intended ban on peaceful protest that proved unenforceable.

In the UK: Time to stop going backwards on climate

Far from taking concerted action to avoid the threat of catastrophic climate change, the current government has been taking us in entirely the wrong direction. With dramatic cuts to renewables funding, clean energy technology has been sidelined in favour of a dash for gas, insulation funding has also been cut and fracking, roads and runways pushed through despite strong local opposition. Find out more about how David Cameron's government failed to keep their promises (which caused us to go further backwards on climate) and how Theresa May's actions continue to go down the wrong direction, with the approval of another runway at Heathrow.

We also work with a wide range of local groups in the UK. To find a group near you, click here, or contact us for advice on setting one up.

The best way to address climate change is at a fundamental level - binding targets to cut emissions at a national and international level which are embedded across policymaking. While there is one underlying reason which drives our campaigning - to prevent catastrophic climate change - we work with others on many campaigns.

You can visit our pages below, some of which analyse the different ways in which our environment is being affected, some of the main culprits, what is being done to try and raise awareness of these impacts, and any developments around the world: