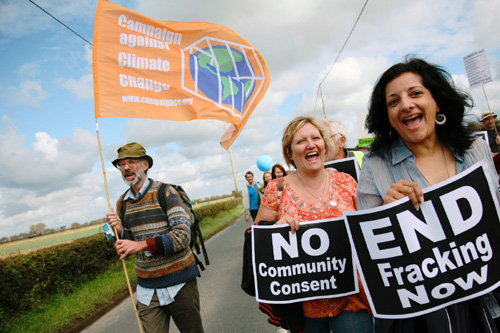 Camp Frack was a huge success!  It attracted activists from all around the country as well as local residents who were a big part of the camp's success. There was lots of media coverage.  Have a look at the video reports below on Camp Frack, as well as footage from the demo.

The Saturday was spent with a host of lively workshops and also planning sessions to build the campaign. For some there was also time to take the message into Preston, unfurling our monster anti-fracking banner outside the County Council building before taking the message to shoppers in the centre (see photos clickable above).  On Sunday the weather cheered up for our march out to the drilling rig (as close as we were allowed) - which was led by REAF (see below) members and was fantastic fun for all. The atmosphere was full of positivity and infectious good cheer, building a real sense of solidarity between all the different groups involved (see photos and video below)

Involved in the camp, as well as the Campaign against Climate Change was local group 'Ribble Estuary against Fracking' (REAF) , national anti-fracking group 'Frack Off', various Climate Camp groups (eg Liverpool and Yorkshire) as well as members from Friends of the Earth groups and  the Cooperative Society - as well as individuals from all over!

News coverage of the camp

Following Camp Frack, on Wednesday 21st September, Cuadrilla Resources held a Press Conference at the Imperial hotel, Blackpool, announcing it had discovered huge amounts of gas (200 trillion cubic feet), was planning to drill at least 400 wells in Lancashire to extract it, and promising thousands of jobs would be created as a result (there may have been strong financial reasons why Cuadrilla needed to publish good results now: see here and doubts have now been cast on their claims - see here) .  This was a major media offensive from Cuadrilla but having heard the news we srambled to get there and were able to organise a small but noisy protest outside the meeting (see posed photo at start of demo below). We were able to give the other side of the argument highlighting not only the destructive environmental impacts of fracking but also the need for investment in the renewable energy industry, creating jobs in that sector rather than in another fossil fuel - which will increase the  levels of carbon dioxide emissions and lead us further down the path to climate catastrophe. 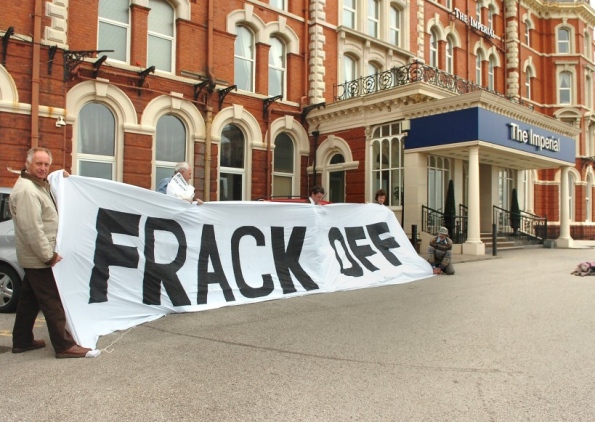 Caroline Lucas - Fracking must be halted until we know more

Beforehand, Camp Frack had amassed interest from the media, including The Guardian and the Blackpool Gazette. George Monbiot also wrote an editorial on fracking mentioning the camp.

See about the anti-fracking banner placed 500 feet up Blackwall Tower here.
See our shale gas page here.
To download a flier about fracking (you could improve it or make your own!) click here. You can also download a Word version for editing here.

Finally for an irreverent light-hearted view of the Blackpool gas "bonanza" see here.
Weight:
11
‹ Public Meeting: The real cost of subsidies for biofuel and biomass electricity up Fracking Hell? What will shale gas mean for the UK? ›