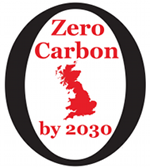 What the government is doing is piecemeal, inadequate and in some ways counterproductive. We need a more coherent, energetic and determined approach to reducing emissions – and a bolder more ambitious national target. We need Zero Carbon by 2030.

Activities and events took place all around the country. 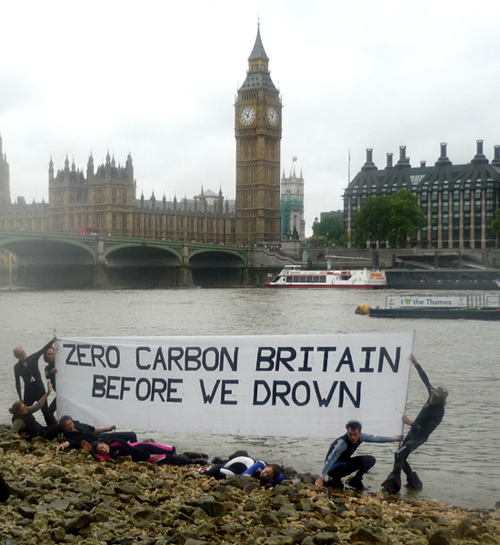 The message taken to the heart of the capital on Zero Carbon Britain Day..

On a day on which the weather made immersion in water seem anyway highly likely... many actions around the country used the theme of “Zero Carbon Britain before we drown” or similar, involving semi-submergence in water near a local landmark.

Others involved lobbying MPs to sign Early Day Motion 853 which calls for Zero Carbon Britain by 2030.  To lobby your MP using our information hub see here.

Others involved meetings or workshops focused on the Zero Carbon Britain 2030 Report produced by the Centre for Alternative Technology, (CAT) which outlines a practical, well researched plan for reaching a zero carbon economy by 2030. To order free 8-page ZCB 2030 pamphlets, or find out about ZCB training days e-mail bruce.heagerty[at] mail.cat.org.uk with 'Zero Carbon Britain Day' in the subject line.

Here are some of the events we have heard about so far (all on 16th July unless stated otherwise) Reports from these events will be posted soon.

Scarborough
The event was cancelled due to bad weather. Local actvists will try to rerun within the next few  weeks, however..

The plan is to have at least 4 people (ideally  5 or 6 people) in the sea and a good photographer. We have told local press and will probably get the photo in the paper.

The banner will read something like "Zero Carbon Scarborough Britain by 2030 or we're in deep water!", and to convey the idea of the water (metaphorically and literally) rising, we'd like to have different people submerged to different heights (either because they are shorter or some of them are crouching/kneeling/sitting. invisible to the camera), with the last the deepest, holding "or we're in deep water!". Normal clothes (with swimming gear underneath).

Sheffield
In Sheffield there was a bike ride up the Don Valley taking in 2 or 3 of the renewable energy sites on route.

At 12.00 noon there was a short publicity stunt - a tug of war - ‘Bikers versus Banksters’ on the Meadow Hall site near the river.

Manchester
There was a small exhibition of cartoons and photos showing the effects of climate change, along with a stall, petitions and leaflets around zero carbon in Manchester City Centre.
E-mail judy.paskell[at]gmail.com

South Lakes
There was a cycle ride to the house of local MP, Tim Farron, to lobby him to sign EDM 853 - leaving Kenadal at 11.00am. Afterwards people went to the ZCB event in Lancaster.
E-mail sonnykhan[at]hotmail.co.uk, 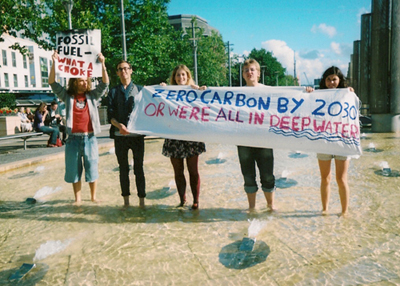 A demo was held in Bristol for Zero Carbon Britain day. Leaflets were handed out and a talk given on how to reduce your carbon footprint. Photos were posed for, for  the local paper, in the fountain outside the hippodrome, an iconic Bristol landmark! At the end of this the banner was hung near the main road to spread the message! 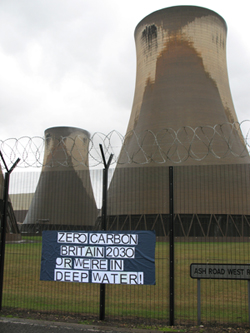 Kirklees
Kirklees CCC has already held a Zero Carbon Cycle Tour on 7th May. See here. On 16th July there was an activity with a stall and 'Zero Carbon Snakes and Ladders' game in Huddersfield.

There was also be a Zero Carbon picnic at Drax power station (site of the first Climate Camp). Meet at the South Gate of Drax Power Station. Meet fellow activists, learn about the issues and come together under the banner: ‘Zero Carbon Britain by 2030 or we’re in Deep Water’. This was a peaceful protest that has been organised in liaison with Drax and North Yorkshire Police.

Finally, there was a lobby of  Barry Sheerman MP on 22nd July.

Oxford CCC and Low Carbon Headington held a Zero Carbon stall at the East Oxford Farmers Market to campaign on the EDM. A public meeting on Zero Carbon campaign is planned for November.

If you know of any more ZCB Day events, please e-mail info@campaigncc.org.