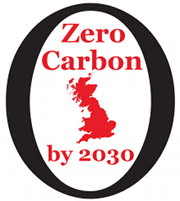 The Campaign against Climate Change believes that net global emissions of greenhouse gases must be reduced to zero as fast as possible and this should be the overriding goal of the entire global community acting together through a fair and binding international climate treaty.

Within this context some sections of the global community have a greater responsibility to reduce emissions more and faster than others. The United Kingdom belongs to the richer developed part of the world with a high per capita level of greenhouse gas emissions and, as the pioneer of the Industrial Revolution, an enormous historical carbon footprint. We believe that the UK can and should do its fair share to reduce global emissions and be prepared if necessary to lead the way.

Given the immensity of the threat we face from  the catastrophic destabilisation of global climate, the time lost already in addressing this threat and the uncertainties around, for instance, positive feedback processes and 'tipping points', no target can be said to be entirely 'safe'. At the same time while justice demands that we do our 'fair share' our national security demands that we do not only that, but enough to persuade the entire global community to act decisively with us.

In this context we are calling for a target of around zero net carbon, and zero net greenhouse gas, emissions by 2030. We cannot be one hundred percent sure this will be enough to forestall catastrophe and nor will it be easy but we are certain that with the political will and a great deal of urgency and determination it is possible. And it will bring a great number of other benefits besides giving us a fighting chance in the battle against climate catastrophe.

The Centre for Alternative Technology in Wales has been working through its Zero Carbon Britain Project on a strategy for rapid decarbonisation of the British economy for many years. Last year it published its latest report "Zero Carbon Britian 2030" which outlined in meticulously researched detail how Britain might reduce its emissions to  zero by 2030. This is just one possible way and there will be much disagreement and discussion over many of the details but the report serves magnificently well the purpose of demonstrating that it is possible. Half hearted attempts or opportunistic tinkering will not do it but with bold, radical and far sighted strategies - we can.

Join other people all around the country in finding fun, imaginitive ways to promote the goal of a Zero Carbon Britain by 2030.

Find details about our 2012 event here. 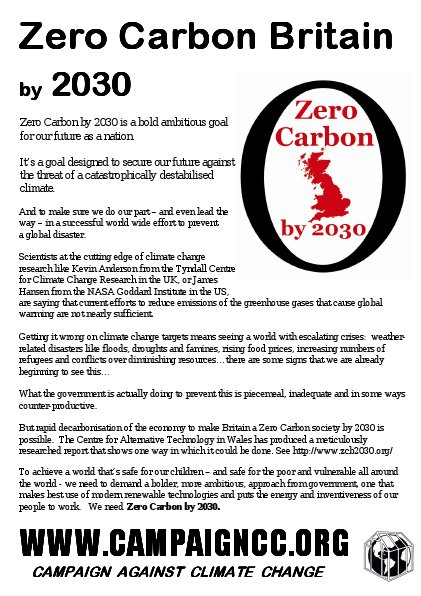