NPPF - planning for a fracked up future? Act by 10 May 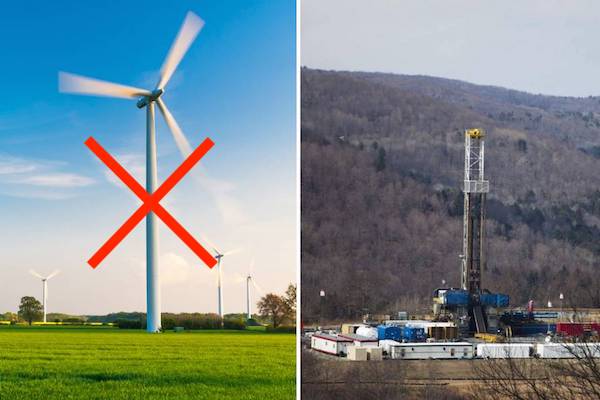 A new planning framework out for consultation now would set in stone a dangerous double standard. However unpopular fracking applications might be, the guidance would mean planning authorities would have to 'facilitate' them. Yet they would be forced to reject wind turbines in almost all cases, even if public opinion was in favour.

The National Planning Policy Framework (NPPF) for England will determine what can be built in coming years, guiding local authorities in the preparation of development plans and decisions on planning applications.

It could open us up to a fracking-free-for-all, while making new onshore wind almost impossible.

The draft text is here, and you can respond via the online form (this seems relatively straightforward, you navigate by ticking a box for the page you want to go to and clicking 'Next'). NB. it is fine to only leave comments in response to one or two questions! You can also send responses by email to planningpolicyconsultation@communities.gsi.gov.uk (don't forget to include your name and address and be clear which section you are commenting on if you do this). The deadline for responses is 11.45pm Thursday 10 May.

At first glance the draft text may seem reasonable, but a key footnote tells a different story...

This effective 'ban' on new onshore wind has existed as ministerial guidance since 2015, resulting in a 94% drop in onshore wind planning applications in England. The NPPF would set this in stone.

Have your say (Question 32) Responding in your own words is best. The main point to make is that the planning framework should be facilitating onshore wind, a clean and popular technology, not blocking it! Footnote 40 should be deleted. More key points you can make are set out below

Chapter 17: 'Facilitating the sustainable use of minerals'

Paragraph 204: "Minerals planning authorities should recognise the benefits of on-shore oil and gas development, including unconventional hydrocarbons, for the security of energy supplies and supporting the transition to a low-carbon economy; and put in place policies to facilitate their exploration and extraction."

Hmm. Spot the difference between this and the guidance relating to onshore wind...

Have your say (Question 37) Responding in your own words is best. The main point to make is that since fracking (and other 'unconventional hydrocarbons') can be damaging to the climate, local environment and health, planning authorities should not be required to facilitate their extraction, but should focus on facilitating renewable energy and low-carbon development. More key points you can make are set out below, plus a suggested response to question 38

If you've responded to these two chapters, then thank you! If you would like to comment on other issues such as wildlife protection and the broader sustainability framework then you might want to read the Friends of the Earth response

Before you go, please share this page, on Twitter, Facebook or by email, to enable more people to have their say and prevent a fracked up future!

Have your say on onshore wind: more information on question 32

Onshore wind is vital for a low carbon economy: It is the cheapest form of renewable energy, with costs having fallen rapidly, and is important in meeting the UK's obligations under the Climate Change Act and Paris agreement. We are off-target for these: the Committee on Climate Change notes that current policies must be strengthened to meet our obligations.

These restrictions amount to an almost complete ban: This restrictive approach already in place as ministerial guidance since 2015 has almost halted building of new onshore wind capacity (a 94% drop in onshore wind planning applications in England).

No level playing field: Local planning authorities should be free to decide each application on its merits, with local opinion considered in the same way as for other forms of development. The requirement to identify areas suitable for wind energy development in advance is an unnecessary obstacle which could result in popular projects being denied planning permission. The requirement for impacts identified to be 'fully addressed' and for proposals to have community 'backing' are not needed for any other type of development. They could imply that a vocal minority of opponents should be allowed to block projects even when their objections are not substantive. Overall they discourage planning applications to be submitted since it is not even clear what criteria must be met. The text in the footnote should be deleted.

Community energy projects should be supported, not blocked: Paragraph 151 states "Local planning authorities should support community-led initiatives for renewable and low carbon energy." It is particularly important that smaller wind energy projects are exempted from any additional requirements or obstacles or this 'support' will be meaningless.

Have your say on fracking: more information on question 37

A bridge to nowhere: The idea that onshore oil and gas development supports the transition to a low-carbon economy is not supported by the evidence.

Review of evidence needed: In addition to the uncertainty over the climate impacts, in the last few years there have been hundreds of peer-reviewed papers describing the harms of fracking, particularly to human health and the environment. Other countries have reviewed this evidence and implemented moratoria or bans on fracking. It is therefore unacceptable for a presumption towards approval of fracking applications to be included in the NPPF without further review of current evidence.

It's not 'just exploration': Paragraph 204b) says planning authorities should “clearly distinguish between, and plan positively for, the three phases of development (exploration, appraisal and production)”. But it makes no sense for planning authorities to consider exploration in isolation from its logical consequences - no oil or gas company would drill an exploratory well without having the intention to move to full production if they can. This section should therefore be rewritten to instruct local authorities to take into account the whole life cycle of a well-site – exploration, appraisal, production and abandonment – when assessing planning applications for exploratory wells

Coal bed methane production has been shown in places like Queensland to have serious climate, environmental and community impacts including methane leakage, water contamination and air pollution. In fact, having seen the devastation wrought on the Queensland countryside, many other Australian states have now prohibited the practice. In the UK, the heavily faulted geology in areas mined for coal would make this process even more risky. Paragraph 204e) encouraging “the capture and use of methane from coal mines in active and abandoned coalfield areas” should be removed, or replaced by a presumption against such activities.

Fracking for plastic: The main justification given for making local authorities approve fracking planning applications is the UK's energy demand. However, INEOS, one of the major UK fracking players, is a petrochemicals company, intending to use fracked gas for plastics production. Since the reduction of plastic pollution has recently been a priority for the UK government, local authorities should not be required to 'facilitate' such applications.

Question 38: Do you think that planning policy on minerals would be better contained in a separate document?

The NPPF is based on an overall framework of sustainable development, requiring local authorities to give weight to economic, social and environmental factors. In separating the planning policy on minerals, it is likely that the social and environmental aspects of any guidance will be minimised. Taking minerals out of the NPPF could be seen as a step towards making shale gas a Nationally Significant Infrastructure Project, removing all control of minerals production from local authorities and placing it in the hands of government ministers.