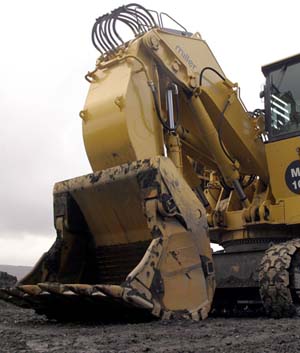 Millier Argent call it a “land reclamation scheme” but this is an Orwellian euphemism for a 1,000 acre, 600 feet deep, black hole - just 36 meters from nearby houses and close to a primary school nursery.

'Miller Argent' is the consortium that is responsible for the UK’s biggest opencast coal mine at Ffoss-y-fran, near Merthyr Tydfil in South wales. The mine will produce dust, smoke and noise in a town that already has the worst health in Wales, for more than 15 years while the coal is being dug out.

But not only will the mine be the blight of Merthyr Tydfil - it will produce 30 million tonnes of climate-wrecking CO2.

Coal produces more C02 than any other fuel. We desperately need to reduce our emissions of C02 and do it NOW because scientists tell us we have only ten years or so before climate change could accellerate out of control. Even the government realises this and is committed to emission reduction targets in its Climate Bill. But to achieve these reductions we should be urgently looking at ways to both reduce energy consumption and find sources of energy that do not produce CO2. This is absolutely not the time to be ripping up the land and making the lives of the people of Merthyr a misery in order to perpetuate a fossil-fuel economy that will only bring catastrophe if we dont ditch it for something better - fast !

And its not just about making the right energy policy decisions here in the UK. We need to be able to argue for the whole world to reduce emissions - no other way can we deal with the global climate crisis - and we cannot do that with any credibilty if we are expanding our own production of the dirtiest of fossil fuels - coal

A nasty Smell of government collusion.

Moreover Miller Argent only seems to have been able to get away with this environmentally destructive money-making scheme due to the devious hidden hand of government support. A letter sent in 2004 from Stephen Timms, then energy minister, to Rhodri Morgan, first minister of Wales, says “my officials have had regular contact with Miller Argent” and demands that the company’s application be ”resolved with the minimum of further delay”. This was against the will of locals who mustered 10, 000 signatures against the scheme and won a ruling against it in the high court only to be overturned on Miller Argent’s appeal. Yet the whole scheme was only able to go ahead because planning rules for coal workings in Wales have been delayed for ten years. In Scotland there has to be a buffer of 500 metres between the workings and peoples’ homes - and a technical advice note from the Wesh office recommends 350 metres but its full implementation has been delayed. There is the suspicion that it has been deliberately delayed to make sure operations like the one at Merthyr (where the nearest homes are 36 metres away) can go ahead without hindrance. Also an offer of a health impact assessment from researchers at Cardiff University was twice turned down.

This all looks part and parcel of an unhealthily close relationship between the government and the commercial interests backing ‘new coal’ as the former cedes all the demands of a new ‘Coal Forum’ that it created (in 2006) and as it developes plans for a new wave of coal-fired power stations, starting with Kingsnorth in Kent. This is a policy direction that will be disastrous for the climate and will make even the government’s own emission reduction targets impossible to reach. The victims of this insane decision making will not just be the long-suffering people of Merthyr but the poorest and most vulnerable communities across the globe who will bear the brunt of the increasingly severe floods droughts, cyclones and other disasters that a destabilised climate will bring in its train.

See George Monbiot's article in the Guardian (from which much of the above comes..) about Ffos-y-fran here

See more about the Ffos-y-Fran mine and keep up to date with direct action protests against the mine and nearby coal-burning Aberthaw Power station at www.thecoalhole.org

Find out about the local campaign against the opencast coal mine at www.stopffosyfran.co.uk

Demonstration on "Fossil Fool's Day" Tuesday April 1st, 3-6.30 pm outside the London offices of Argent Group PLC (5, Albany Courtyard, off Piccadilly). Argent Group are a property developement company, one half of the consortium. 'Miller Argent', that are behind Ffos y fran opencast coal mine.