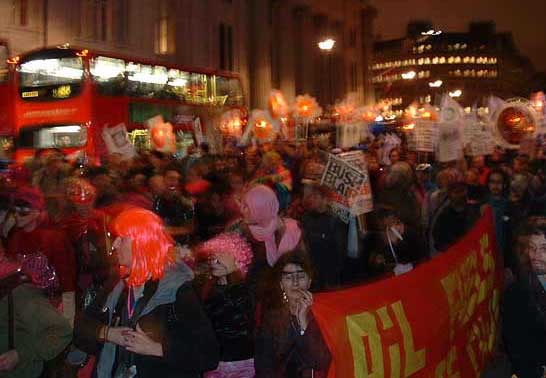 As Bush arrived in London on Tuesday evening (November 18th) climate protesters were already on the streets! The "Burning Planet" March was a fantastic success. The march set out from Lincoln's Inn Fields about 7 pm, headed by our globe-in-a-greenhouse, closely followed by our giant (10 foot diameter) globe displaying the message "Stop Bush, Stop Climate Change", and somewhere behind the "Rhythms of Resistance" samba band, the 'Rinky Dink' bicycle sound system, and the 'Soapbox trike' system, too.

Already by then we'd had loads of media coverage, just as we got ready at Lincoln's Inn...with live interviews on ITN and CNN, and much more as the place buzzed with journos and cameramen all over the place. The colourful throng featured a 'Lady Flaming Planet' (Lucy Wills), assorted tiger-costumed figures, 'glowing globe'lanterns and streaming 'globe' balloons; it progressed past the ExxonMobil offices on Aldwych, down the Strand, through Trafalagar Square, up Pall Mall as the world's leading 'eco-terrorist' flew overhead in a chopper headed for Buckingham Palace, on to Piccadilly circus and finally through Mayfair, getting to the US embassy around 8.30 pm.

At the embassy we had a really great line up of speakers. First we had a tremendous speach from Michael Meacher - Environment Minister until this summer, now speaking his mind about the environmental policies of GWB (to read his speech click here )- and then more good stuff from Tony Juniper, Director of Friends of the Earth; Stephen Tindale, Director of Greenpeace, Darren Johnson of the Green Party (GLA member) and finally George Marshall one of the moving spirits of the 'Rising Tide' climate campaign group. Altogether it was an effective statement from the British environmental movement as a whole against the climate and environmental policies of George W Bush... and this was the way it came over in the media: in the Guardian, Independent and Times; on Channel 4 News (interview by Andrew Lockley), BBC 2's newsnight, and many other British, American and other foreign news channels.

Altogether a fantastic evening's event! Well done and thanks to everyone who helped make it happen! 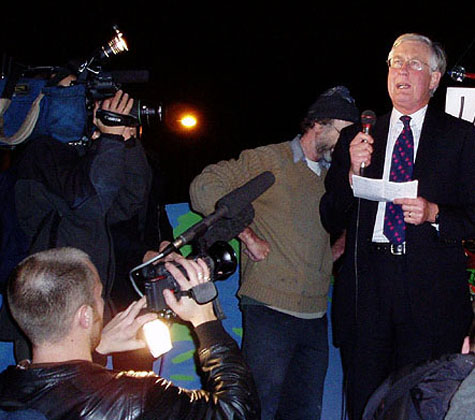 Michael Meacher speaking at the rally at Grosvenor Square. 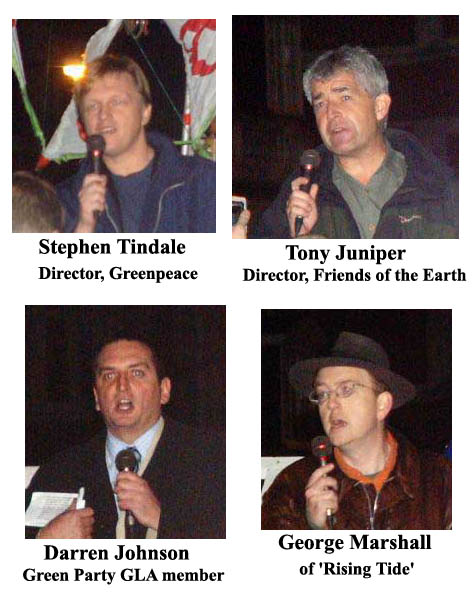 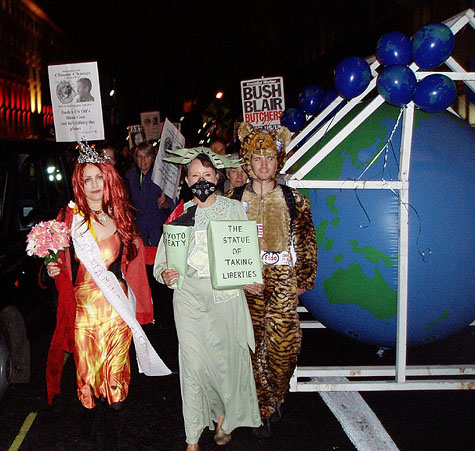 'Ms Flaming Planet' and The statue-of-Taking-Liberties' 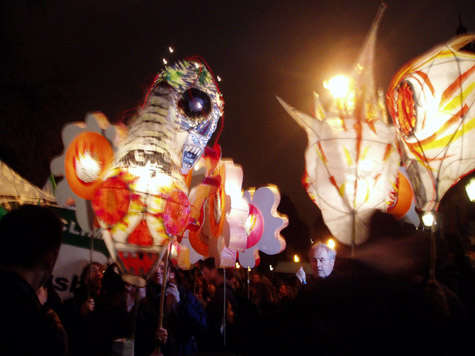 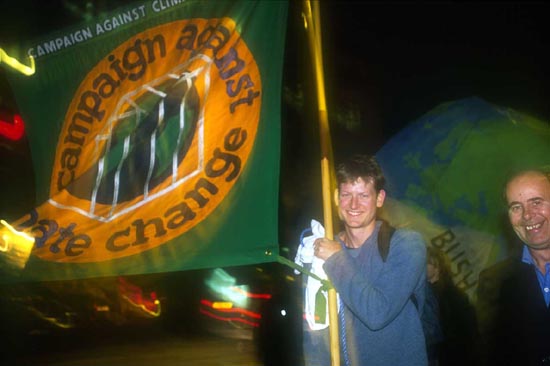 The CCC banner, held by Mark Lynas, revered author of 'News from a Warming World' (or something like that) with John Vidal, revered Environment Correspondent for the Guardian, to his left. 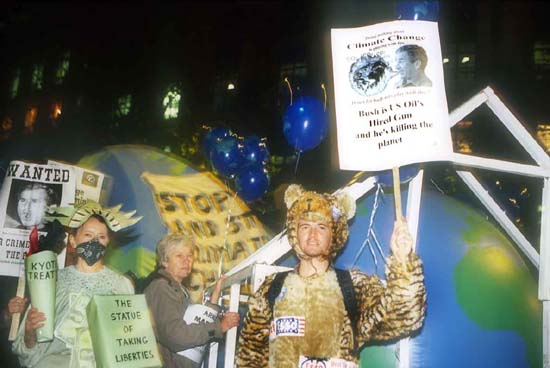 Auriel Glanville (Coordinator, Merton FOE) as the Statue of Taking Liberties, Rhona Hodges from Shepstow FOE, and an (anti-)Esso-Tiger 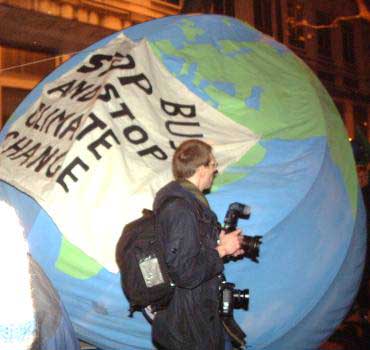 Our giant (10 foot diameter) globe with its message : which appeared on ABC TV in the US, that night. (Despite its habit of keeling over backwards all the time.) 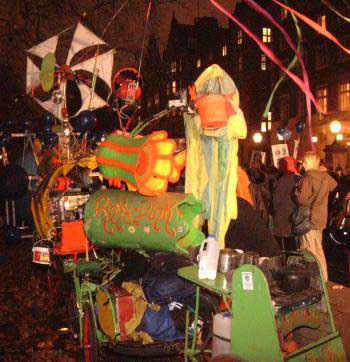 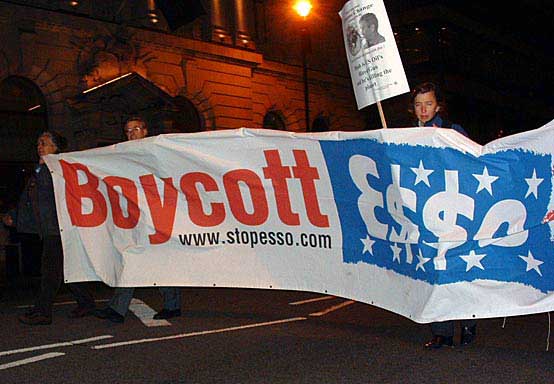 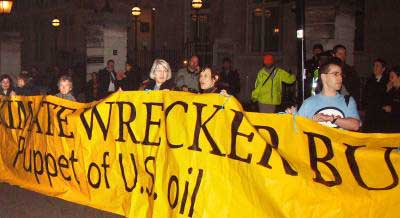 This banner provided by (and held by) Ealing Friends of the Earth.

Fancy lantern-thingies from Friends of the Earth 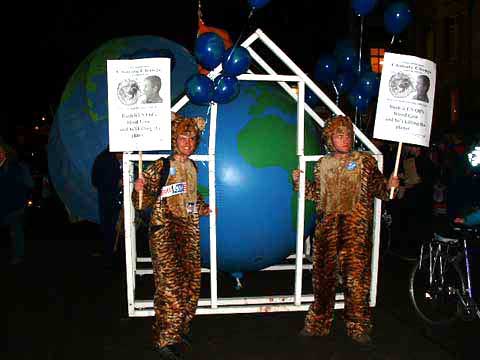 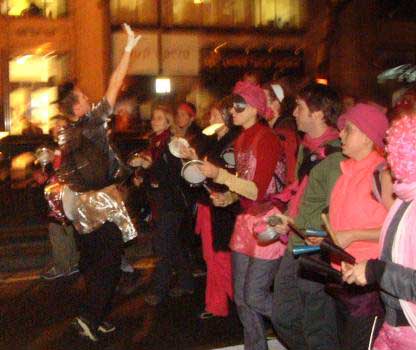 The 'Rhytms of Resistance' Samba Band. 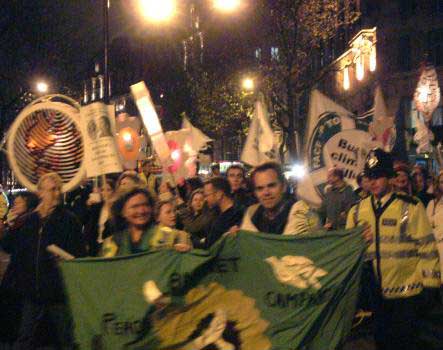 A Green Party banner. Miranda Dunn is the blurry person holding it, on the left. 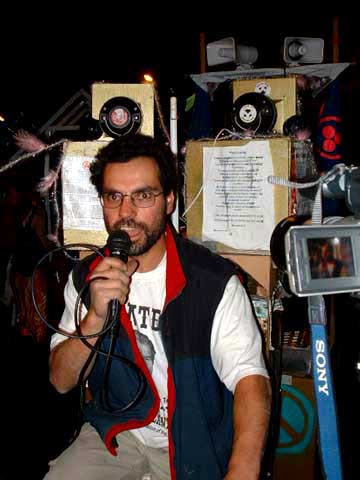 Tony Lourenco with his 'soapbox' trike. 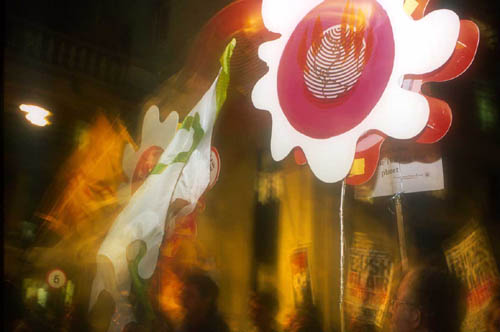 Funky lanterns again: a picture like this appeared in The Times, next day. 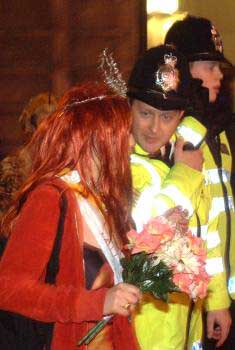 Think up your own caption for this one!