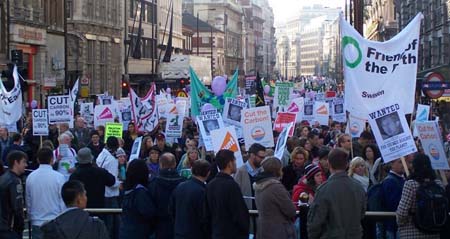 The 4th November was the Saturday before the UN Climate Talks (COP 12/ MOP 2) in Nairobi (6th-17th November). On this day there were demonstrations and events, demanding urgent action on climate change all round the world ( see www.globalclimatecampaign.org ). In Nairobi, itself, there will be a demonstration on Saturday 11th November, midway through the Talks, whilst the delegates are actually present.

The London demo was a huge success with an overall turn out more than twice that of last year(see below ) when we had 10,000 on the streets of London. The day kicked off early in Grosvenor Square, outside the US embassy at 11.00 am, with poetry and performance from avariety of artists. Then, as the Square began to fill things really livened up as "Seize the Day" took the stage with their brand of 'protest-folk' . Meanwhile the Cycle Protest, starting out from Lincoln's Inn Fields, had already demonstrated outside the Australian embassy and had also delivered a letter to No 10 Downing street, demanding a Climate Bill, with ANNUAL targets amongst other things. The cyclists arrived - noisily - in the Square, all 600 or so of them, just as our first speaker, Collin Challen MP had started. More great speeches followed from Norman Baker MP for the Lib Dems, Caroline Lucas MEP, for the Greens, Zac Goldsmith (was it for the Tories or for the Ecologist magazine?) and Raniya Khan for respect. Next we had none other than our local prelate, the Bishop of London , speaking eloquently about how climate change would hit the poor. And finally our Honorary President and star speaker campaigning journalist George Monbiot, who was on the very best of form. There remained Phil Thornhill, Campaign Coordinator to round things off and invite everyone to join the "March for Global climate Justice".

By now the square was swarming with folk and buzzing with all kind of activity. Some kind of order was formed out of chaos as our veteran 'globe-in-a-greenhouse' headed the prcession out of the square, with all manner of flag and placard-wielding folk behind. A samba band had started in one part of the square, whilst a New orleans Jazz band livened up the departing throng. Yet another kind of sound was provided by a lone Scotch piper near the front of the march. Amazingly the great cavalcade of sound and activity reached Trafalgar Square on schedule - though since the march stretched just about all the way back to Grosvenor Square from here it took some tme for all the marchers to find their way into the square to witness what remained of the "I Count" rally with assorted celebs and a band (whose name I never get right). Altogether it was a fantastic triumph with the march on its own possibly twice as big as last years - not to mention the folk already gathered in Trafalgar Square. See more photos from the demo here

Meanwhile the international demonstrations and events, we already knew, were taking place in over 40 countries - twice as many as last year. And by now we'd had reports that there had been 40, 000 in Sydney, 30, 000 in Melbourne and maybe 90,000 in 20+ locations all round Australia. Colourful demonstrations in Taiwan and Korea, too. And the reports are still coming in from all round the world . See www.globalclimatecampaign.org .

This was the timetable for the day in London:

For the Downing Street demo for a strong Climate Bill, a couple of weeks after the National Climate March, in November see here.