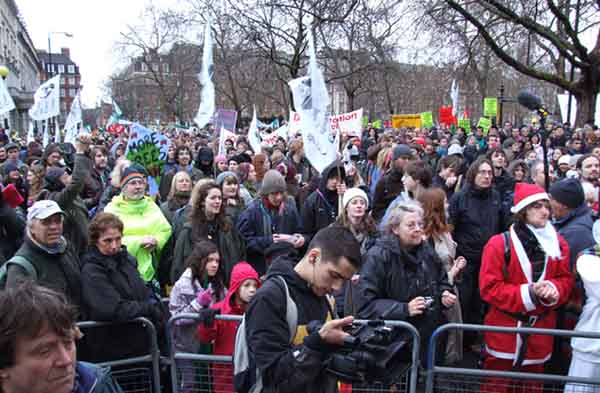 Despite torrential rain, and the worst weather you could wish for, the National Climate march was a great sucess - with up to 10,000 people turning up to show that they felt passionately enough about the issue not to be put off by the horrendous conditions.

The march assembled at Millbank in a downpour strong enough to put off the keenest (and which surely must have reduced numbers considerably - perhaps by up to 50%). Nevertheless a formidable if soggy throng set off past the Houses of Parliament with placards demanding an effective Climate Bill from the government - just about surviving to get that far before they began to turn to paste in the rain. The marchers were joined by two or three hundered cyclists, those super-keen enough to battle against the elements for a protest ride round London that had started earlier in the morning at Lincoln's Inn Fields. They had already staged two small protests - one at a Tesco store against biofuels and their effect of accellerating deforestation and therefore climate change, with speaker Andy Boswell from Norwich CCC and Biofuel Watch (see the Biofuel Watch Press release here) and the other at the Department of Transport in favour of climate friendy transport, with speaker Peter Lockley from Airport Watch. 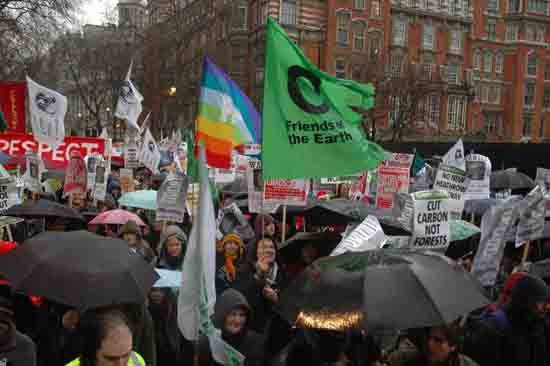 Umbrellas go up as protestors gather in the rain.
After Parliament the head of the long train of drenched protestors reached Downing street where a delegation composed mainly of the the Hills family (Joanna with Imogen aged 4, Elliot, 9, Dylan 11 and also Monique Kellay, 16 and Jonathan Essex from the CCC steering group) handed in a a letter to No 10 (see letter here ) - on behalf of the campaign and the younger generation which will see the biggest impacts of climate change. With banner carriers struggling against the wind and the occasional slackening, or even break, in the rain being greeted with relief the marchers soldiered on, chanting slogans in defiance of the weather, down Whitehall, through Trafalgar Square, Piccadilly Circus and on through Mayfair to Grosvenor Square. The campaign's veteran 'globe-in-a greenhouse' on wheels was out in front, together with the campaign banner which determined carriers bore up against all that the wind could do to blow it backwards or completely over. 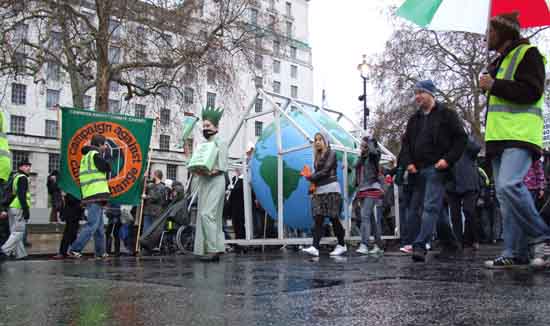 The head of the march with CCC banner, globe-in-a-greenhouse and the indefatigable Auriel Glanville as "the Statue of Taking Liberties"
At Grosvenor Square the marchers assembled around a stage in the North East corner of the square where they were greeted with music frpm 'Seize the Day' to raise their soggy spirits. Then came a line of terrific speakers - most notably Michael Meacher, ex Labour Environment minister speaking his mind on what the government ought to be doing about the cimate crisis, and Chris Huhne shadow Environment Minister, from the Lib Dems on a similar theme and Caroline Lucas, Green party star and MEP at her usual eloquent best. Zac Goldsmith, editor of the Ecologist magazine and environmental advisor to the Tory Party could not make it in person but his contribution was ably delivered by by Hilary Gander who was also the unflappable master of ceremonies for the whole event.
Shorter (but punchy) contributions also came from Fraser Winterbottom describing his experience of the Christian Aid marathon 'Cut the Carbon' march, earlier in the year, Sophie Allain from the Climate Camp, Rahnia Khan - Respect councillor from Tower Hamlets, Andrew Boswell from Biofuel watch, Tony Kearns form the Communications Workers union and finally Tim Helweg-Larsen offering a positive vision for the future from 'Zero Carbon Britain'. Rounding off was Phil Thornhill, National Coordinator of the campaign and in a triumphant finale the ever-spell-binding George Monbiot. There had been a fantastic bouncy musical interlude from Seize the Day which kept the energy levels high and a huge crowd remained right to the end of this long line of speakers - before dispersing at last to places dry and warm. 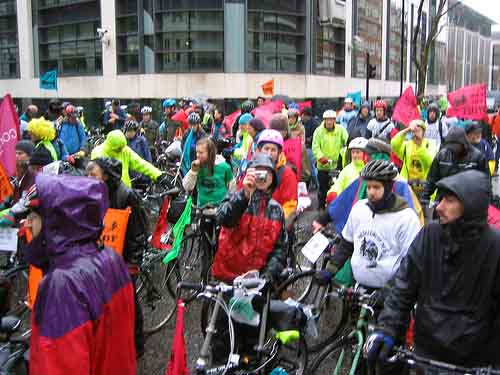 Cyclists defy the rain - earlier in the day. One of them ended up on the front page of the Sunday Times.
Their efforts were rewarded by good media coverage, with the march featuring on the front page of the Sunday Times, a good write up in the Independent on Sunday, and good reports from the BBC.
At the same time as this National Climate March demonstrations or events were held in around 70 countries, with over 10,000 protestors involved, in Taiwan and Germany. See further here.

What we were demonstrating for:
This may seem pretty obvious: to save the planet and billions of people on it - from the horrific tide of death and destruction that will come from the catastrophic destabilisation of global climate. But there are two main things we were pushing at the demo, which were reflected on the route chosen for the march.
We started at Millbank near the House of Commons and marched past No 10 where we delivered a letter. The focus here was on the UK government passing a strong Climate Bill. This will establish in legislation a cap for the whole of the UK's emissions - so its not like so many other climate initiatives - very good in themselves but at risk of being cancelled out by an increase associated with another sector of the economy. Also we cannot make meaningful reductions by our own individual efforts alone - these efforts will be wasted unless they are part of an overall plan coordinated by government. These are some of the reasons why we feel a strong climate Bill is so important !
We finished at the US embassy. Clearly whatever we achieve in the UK will be no use in solving this global problem except insofar as it encourages other nations to act and gives a stronger hand to those working to achieve a global agreement that will establish a cap on the global total of emissions. That is why our 'National climate March' was part of a Global Day of Action with demonstrations and events in more than 50 contries demanding real action on climate from world leaders at the UN Climate Talks in Bali. But the biggest block on progress at those UN Talks was still, as it has been for a decade or more, the United States. In particular the Bush administration has both rejected Kyoto (in 20001) and cynicaly manouevered to sabotage progress at the UN Climate Talks. It still refuses to accept binding targets (the only basis for a meaningful treaty) in a post Kyoto agreement and demands action, first, from China and India despite the fact that these countries emit far less per person, are much poorer with fewer resources to take the necessary action and do not have a historical reponsibility for much the greater part of the greenhouse gases currently in the atmosphere.

Prior to the Bali talks Bush tried to derail progress on climate at the Washington Climate Conference on the 27th-28th September (see more, eg, here). This was a transparent attempt to divert the world down a blind ally of 'voluntary measures' and 'intensity targets' and thereby pre-empt and derail real progress on absolute and binding targets (the only thing that can really work) at the official UN Talks in Bali. This came after he had forced the final communique at the G8 in Heilegendam in June to abandon any firm emission reduction commitments. Bush had been forced to change his language on climate but continued to be the major obstacle to progress. He may be on the way out but he is still doing damage and the cost of the delay he is imposing could ultimately be measured in millions of lives. That is why our march finished at the US embassy with a massive demonstration to show that we will not just stand by and allow Bush - or anyone else - to wreck the global effort to save billions of lives from climate catastrophe.
* Thanks to the thousands of climate change protesters who braved the weather in London - and thanks to all those around the world for being a part of this global event *
To see the BBC online coverage, click here.

To see photos of the National Climate March in London, click here.

To see photos of the 2007 Global Day of Action, click here.

New: To see videos of all the London speeches in full, click here.
Weight:
0
‹ 2007 events up "How can we win the race against climate catastrophe?" ›