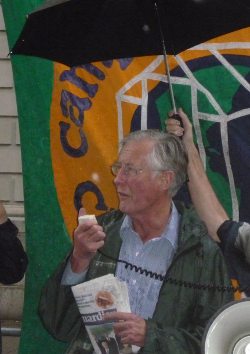 Outside the Dept. of Energy and Climate Change, 3 Whitehall Place.

Michael Meacher MP (see left) spoke at a rally in support of the beleaguered workers occupying the Vestas factory - and demanding the government match its words - on Green Jobs and the Green Energy Revolution - with action. Other speakers included trade unionists Billy Hayes, General Secretary of the CWU and Alex Gordon from the RMT,  Jenny Jones, GLA member from the Green party, Michael from the Isle of Wight Vestas factory and Phil Thornhill from the Campaign against Climate Change.

Photos from the event here.

Demonstrators braved the rain to hear a great line up of speakers. Luckily we just about managed to finish before the real downpour started!

Just when we need a huge expansion in renewable energy they are closing down one of the two wind turbine factories in the UK. The government has spent billions bailing out the banks, and £2.3 billion in loan guarantees to support the UK car industry – they can and should step in to save the infrastructure we are really going to need to save us from climate catastrophe.