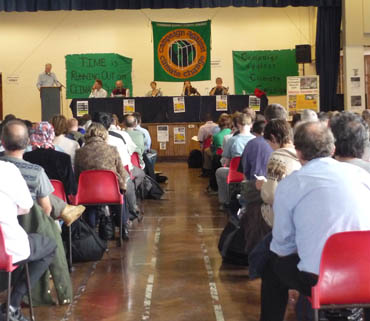 The Climate Forum hit a high with a positive effervescence of multi-faceted perspectives on the climate crisis.

"Positivity" and "Negativity" battled it out on Saturday's major plenary with contributions from Michael Meacher MP, Caroline Lucas MEP, Tony Juniper (Director, Friends of the Earth), Isabel Fremaux from the Climate Camp and the Campaign's own Phil Thornhill.

The Sunday 'International Plenary', meanwhile, exposed the audience to some perhaps less familiar perspectives from around the world - with Bangladesh, Nigeria, Belgium, Taiwan, Spain, Senegal and the Phillipines all represented on the panel. Workshops (50+!) as ever covered a multiplicity of themes but some very constructive, no-nonsense, discussion was had on major campaigning themes like Heathrow/Aviation and Kingsorth/New Coal. In particular John Macdonnel MP was able to offer a detailed and up to date analysyis of where the Heathrow campaign now stood - to those who made it to the early Sunday morning seminar!

‹ No New Coal march up Demonstration at Heathrow ›