How not to save the planet

The world is on the verge of passing 400ppm (parts per million) CO2.

As a reminder, pre-industrial levels were somewhere around 280ppm. A 'safe limit' might be 350ppm (yes, that's where 350.org got their name). As CO2 levels peak, as they do around May, each year, levels of 399.72ppm have already been recorded and 400ppm is likely in the next few days.

This news is breaking while countries gather in Bonn this week for yet more climate negotiations. We might expect to see Ministers and Prime Ministers rushing to respond to the crisis while the world's media holds its breath. Or not. In the words of anonymous blogger at the talks 'Low Carbonara' "The sense of urgency was palpable but only when it was time for lunch."

Photo by Sébastien Duyck of Adopt a Negotiator.

The two graphs below from the Scripps Institution of Oceanography show CO2 levels over the past 300 years and the past 800,000 years. It is clear that this concentration of CO2 is unprecedented for hundreds of thousands of years. In fact, the last time scientists estimate CO2 levels were around 400ppm were in the Pliocene, 5 million to 3 million years ago. Global temperatures were 3-4C higher than today, sea levels 5-40m higher. The difference is that today, levels of CO2 have risen over a few years, not millennia, and the rise shows no signs of stopping. 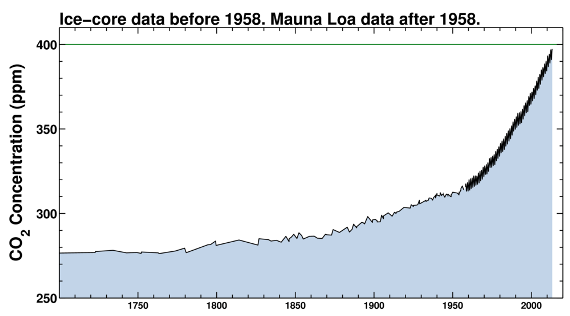 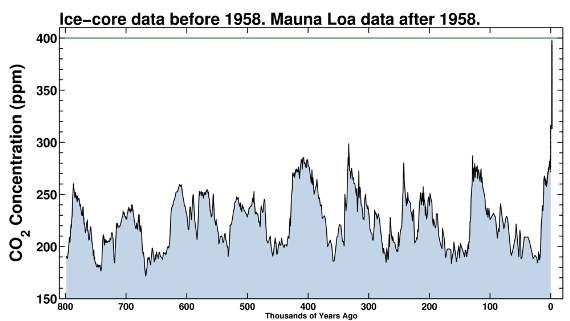 To be fair, not all at the climate negotiations in Bonn are failing to grasp the situation. The group of 49 Least Developed Countries issued a statement at the beginning of the talks. These poorest nations have done least to create the current situation, having emitted a miniscule fraction of the additional carbon in the atmosphere. Despite this, they recently agreed to accept binding emissions cuts targets.

Their people are first in line for the destructive impacts of climate change. Subsistence agriculture, on which these countries depend heavily, will be harmed by increased tropical cyclones, droughts and loss of soil fertility. This, along with floods, dwindling water supplies and disease could lead to millions of climate refugees. And these countries have the least financial and technical resources to deal with this. Many of them are already experiencing the impact of climate change at our current state of 0.8C average above pre-industrial temperatures. They are all too aware that an average global temperature rise of 2C would not in any sense be 'safe' for them. (Whether it is 'safe' in the longer term for any country is highly debatable)

"We must not embark on yet another procedural heavy process. Delay will certainly lead to a 4°C warmer world... We must draw lessons from the past negotiations under this Convention, and implement urgent actions to address climate change."

"The sum of mitigation-related actions by all Parties should lead to an aggregate global emission pathway that is scientifically consistent with limiting warming below 1.5°C by the end of the 21st century."

"The 49 least developed countries will not be complicit in a farce leading toward a 4°C warmer world."

Poorer nations have set a challenge to the richest and most culpable - will it be accepted?

There are seven months until COP19 in Warsaw. The negotiating positions of our governments there will depend on how much pressure we, their citizens, can put them under. To build an effective movement, we have to use every weapon we have to fight apathy.

We need to convey the brutal reality of these numbers.

Would it be so easy for politicians and the media to dismiss climate change if it was widely understood: