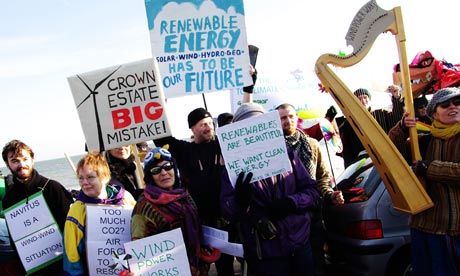 On 14 January, a group called 'Challenge Navitus' organised a demonstration on Swanage seafront, the site of a proposed 100-330 offshore wind turbine project called Navitus Bay. So far, the usual story of anti-wind propaganda and nimbyism. But this occasion was notable for the presence of another group - the pro-wind demonstrators also turned out in force. Although there were fewer - 100 as opposed to around 300 anti-wind protestors, by bringing together local groups, this demonstration has the potential to revitalise local campaigning for climate action and clean energy.

"It started when a group of us were at a FoE event on ‘Like it or loathe it – why we need wind’ at which a couple of people from Navitus were on the panel. It was disrupted by the anti-wind lobby – who refused to listen to any answers given to their, largely, ridiculous questions (e.g. “Why are you polluting rivers in China” ) and pretty much made the evening a waste of time. Afterwards we began talking about how this, together with constant anti-wind sentiment in the local press and from local politicians was creating a completely one sided view and we really needed to do something about it. As a result we held a meeting of a number of groups including Greenpeace, Friends of the Earth, Transition Towns, Green Party, Agenda 21, Campaign against Climate Change supporters and a number of individuals with no particular allegiance and agreed to build a coalition of green activists.

This is largely still being shaped but, as the anti-wind lobby was planning the Swanage demo a number of us raised the fact that, whilst we were still agreeing our overall strategy, we should join together to stage a counter demo – et voila! A separate meeting to agree some basics, many emails and facebook mentions and we found over 100 people!

This is a great platform and has really breathed some fresh air into the movement locally. Ironically, the actions of the NIMBY lobby and local Tory press has actually galvanised us rather than pushed us further into the shade."

Theresa McManus, one of the protest's lead organisers, told the Guardian: "We've done a couple of local surveys about wind power, and you always get over 50% saying they're in favour, but the anti-groups just seem to be much more vocal. And then someone mentioned that Challenge Navitus would be demonstrating today, and we thought, okay, there's plenty of support for the windfarms, let's make it a bit more visible."

Bringing local groups together for strong positive campaigning is vital, not just in Dorset but around the country. Mark is also planning to use this success to launch a local Campaign against Climate Change group, and in particular to bring trade unions on board. If you are interested, contact Mark on markchivers61 [at] hotmail.com or 07836 334292.