“This will bring huge benefits to us ...er.....I mean the area” announced Mr Driller, as he moved quickly to quell any suggestions that the development might spoil the look of the area or cause any inconvenience to residents. “There’s a veritable goldmine of gas down there and we can’t let trivial considerations like the presence of a huge polluting eyesore in the middle of the capital, or major disruption to the seat of government get in the way of us getting very rich indeed......er......I mean exploiting this valuable resource for the nation. The fact is that lots of the people in that odd medieval looking building have been happy to inflict this kind of thing on other people around the country so its only poetic justice that now its arriving right on their doorstep......”

This date will be approriate, said Mr Driller, because this is the Saturday midway through the UN  Climate Talks, (taking place this year in Qatar, an oil-rich sultanate somewhere in the desert) - and we’re helping to make sure such Talks won’t be necessary in future by scuppering any chance of moving to genuine renewable sources of energy and thereby ensuring the catastrophic destabilisation of global cimate, so that any Talks held with the aim of preventing that will be a waste of time. We will be erecting our rig in Parliament Square, or Old Palace Yard. Do come along so we can bullshit you how safe it all is..................

Unfortunately exploitation of this valuable resource will require the demolition of Mayfair. Well, hey, it makes a change from destroying pristine forest and displacing indigenous people.......    Mining is set to start on

The tar sands bitumen will be processed in the Canadian High Commission. In order to transport it to the US embassy (whereit will be used to fuel their fleet of 4 X 4s and humvees emitting 200 or so gigatonnes of CO2 into the atmosphere in the process...) we will be building the

from the Canadian High Commission to the US embassy ....... 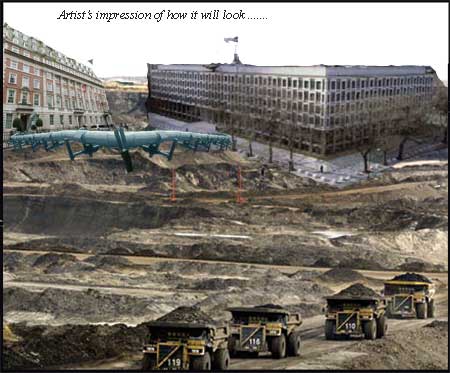 Check back on this page for updates....