Full solutions not half solutions 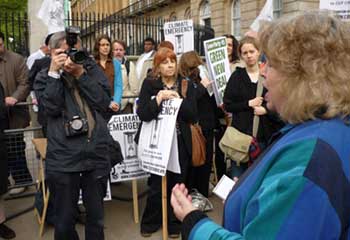 And even in the - arguably rosy case scenario - that the four power stations with 20-25% CCS are successfully upgraded to 100% after 15 years they will still emit up to 275m tonnes of CO2 -around 50% of the UK's annual emissions. The latest science makes it clear that we cannot afford those kinds of levels of emissions if we are to have any half decent chance of preventing catastrophic climate change (see for example www.climatesafety.org). We cannot afford to get it just half right in the fight against climate change. The government must be told there should be no new coal-fired power stations unless they can be guaranteed to have 100% CCS from the start.

This is also about the kind of lead we're giving to other nations in the run-up to Copenhagen. We should be using CCS to reduce emissions from existing coal-fired power stations, not as an excuse to build more. This could just encourage a rash of new coal build around the world on the basis of some vague promise about CCS in the future.

The demonstration featured 2 messages for the government - one on a green poster to congratulate them on banning unabated coal, the other on a carbon-black one - to demand that they go the whole way and ban new coal without 100% CCS.