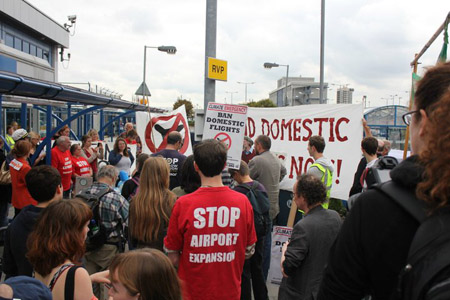 Demonstration at City Airport, London - 11.45 am 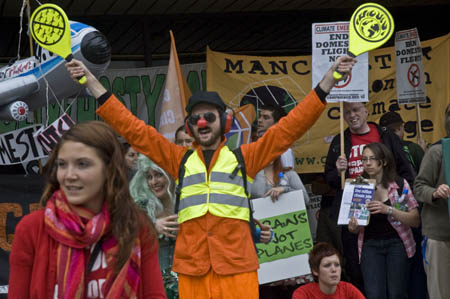 London City Airport and Manchester City Airport were the settings for a Day of Action aimed at achieving an end to domestic flights in the UK.

First off at 11 o’clock in the morning was London City Airport where over 20% of flights are internal ones and there are plans to double the number of flights at the airport. Organised with the local anti-expansion group Fight The Flights around 50 people gathered outside the terminal building to hear a wide range of speakers; GLA members   Darren Johnson (Green Party) and Murad Qureshi (Labour), the CCC’s national co-ordinator Phil Thornhill, John Stewart (orchestrator of the successful Heathrow campaign) Josh Moos of Plane Stupid, plus a letter from Baroness Sarah Ludford (Lib Dem MEP) read out by Fight The Flights’ Anne-Marie Griffin who herself made a great speech about the locals’ plight against the expansion plans. Finally, Peter Deane from 'Food Not Fuel' spoke about how disastrous it would be to use biofuels for aviation.

We then headed off to Euston station on a red open-top bus through the streets of London with banners saying “End Domestic Flights Now!” hanging off it and the top deck full of shouting protestors. 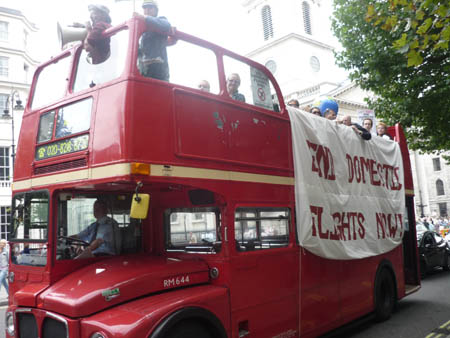 Once we got to Euston we hurried onto the 1:40pm train to Manchester Piccadilly. Upon arrival we were greeted on the platform by members of SEMA (Stop Expansion at Manchester Airport) where a short photo-op resulted in us appearing on the local BBC TV news report.

So, it was off to Manchester Airport on the final leg of our journey where around 75 people, many of them local but also from the surrounding towns made their voices heard outside Terminal 3 at 4:30pm. After a short yet powerful introduction from our climate change mermaid, we heard speeches from Peter Nietschz - a resident of Hasty Lane whose house stands to get demolished if the airport expands its freight capacity which it has been given planning permission to do. John Stewart and Phil Thornhill spoke once again, and we also heard from Martin Eakins (a local Lib Dem councillor who has been opposing the expansion) and Judy Paskell from the Manchester Campaign against Climate Change. The chants of the crowd demanding “take the train, not the plane, end domestic flights!” echoed off the tall terminal buildings, as did the speeches thanks to a powerful bicycle-powered sound system. 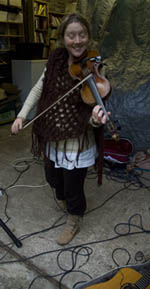 After the demonstration was over we walked to Hasty Lane where a fantastic party in a beautiful garden was held, complete with a ceilidh band and fruit picking in benefit of a local community project, and everyone enjoyed a well-deserved drink and meal. A great end to an inspiring day of activism. We may not have grounded any flights - that was never our intention - but we continued to push the anti-aviation agenda forward after the excellent victory at Heathrow.

"End Domestic Flights" is one of the 'Climate Emergency Demands' - see here.

Before the demo we asked people their thoughts on banning domestic flights and made a video of their responses, you can watch it here.

Weight:
22
‹ National Demonstration against Agrofuels up 'Why we should end domestic flights: aviation in the era of climate emergency" ›