Hundreds crammed into the police pen opposite Downing Street for a lively demonstration against the government decision in January to expand Heathrow with a third runway.

Speakers on the evening included Jean Lambert (Green MEP for London), Susan Kramer (Lib-Dem MP for Richmond) and John Mcdonnel (Labour MP for Hayes and Harlington where the 3rd runway would be built). There was no mistaking the energy of the protest and the strength of the movement against the expansion of Heathrow. This event was one of a number of protests against the government decision carried on by a swelling coalition of groups and individuals. Additional speakers on the evening were John Stewart from HACAN, Anna Jones from Greenpeace, Phil Thornhill for the CCC and Linda McCutcheon from NOTRAG and a resident of Sipson village (which will be obliterated by a third runway). 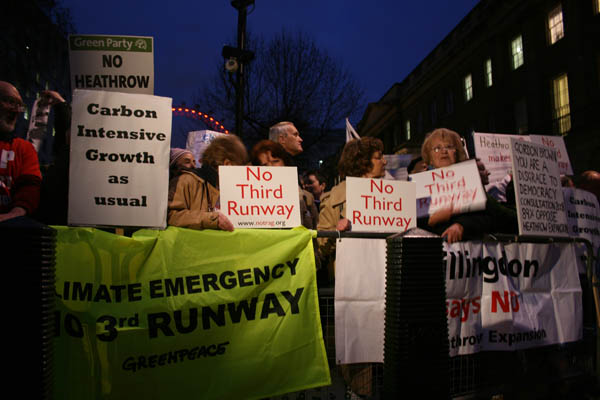 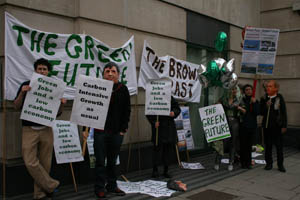 There had been an earlier lunch-time photo-call at the Department of Transport - on the theme of "the Brown Past" and the "Green Future" with Lucy Wills representing the latter and Chris Kitchen as a 'caveman' Gordon Brown representing the former. The message was for an end to 'carbon-intensive-growth-as-usual' and for the government to be taking the kind of investment decisions that will plot the path towards a low carbon economy as fast as possible - a crash program for deep emission cuts in the short term that will provide thousands of 'green jobs' and help lift us out of the recession.

?"COUNTER-DEMONSTRATION"
At the same time as the anti-Heathrow demo there was a "counter-demonstration" in Parliament Square. This numbered a score or so of people - but apparently quite a few of these were 'Plane Stupid' infiltrators! Who actually was behind this "counter-demonstration"? Well first of all note that it was supported by the climate-sceptic networks - see here. And apparently it was organised by something calling itself the "Modern Movement" - see here . However on scratching the surface the "modern movement" turns out to be yet another manifestation of the networks associated with "Living Marxism" and with their origin in the RCP (Revolutionary Communist Party). See here. This bunch have effected a bizarre transformation from extreme left to extreme libertarian right ..they include Martin Durkin, producer of "The Great Global Warming Swindle" - see here. Disinformation and misleading the public (latterly by trying to pretend there is a grass-roots movement in favour of Heathrow expansion) is their stock-in-trade.

We've let Gordon Brown know what a burke he is if he thinks he's going to overcome the tidal wave of opposition he will have to face if he tries to push ahead with this fantastically stupid decision. He's still stuck in the last century world of carbon-intensive-growth-as-usual - lets wake him up to the 21st century, to the low carbon economy of the future! Something that Brown's New Labour clearly fails to understand as it now shows itself to be the most crassly environmentally retrograde and destructive of all the parties.

The so called 'environmental safeguards' that this government has concocted for its Heathrow expansion plans are nothing more than window dressing and a smokescreen. If there is another runway there will be (a lot) more flights and if there are more flights there will be (a lot) more emissions. There is no method remotely on the scientific/engineering horizon to substantially reduce aircraft emissions. And residents around Heathrow have heard these kind of promises before: they know what they are worth - absolutely nothing.

The argument about jobs is misplaced. If the government was doing what really needs to be done to convert Britain to a low carbon economy as soon as possible then it would be creating tens of thousands of new green jobs. Only those jobs would be helping to win the fight against catastrophic climate change - not to lose it !

We are going to fight this plan - and we are going to win ! But there are other reasons why we need to challenge this decision as loudly and energetically as we can.

Over the past few years there has been an avalanche of scientific evidence that the threat from catastrophic climate change is more grave and more imminent than we had ever thought. See here. scientists now tell us that we have less than ten years in which to stop and reverse the the global growth in greenhouse gas emissions. The UN Talks this December in Copenhagen are widely seen as the last chance to secure an international deal that will make that possible ( to join our protest there see here.) . At this critical juncture it is the height of irresponsibility to send a signal to the world that we in the UK are not going to make the fight against climate change our number one priority but are happy to carry on with 'carbon-intensive-growth as-usual' - no matter that it is the poorest and most vulnerable around the world who will suffer from our soaring emissions the most. If our government cannot send a positive signal to the world then we, the people of the UK have to show that we do take climate change and the huge threat it poses to the global community seriously - by challenging the crass retrogressive decisions that our government makes - as loudly and energetically as we can!