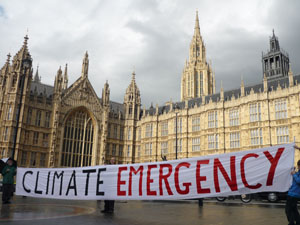 A lively and inspiring Climate Emergency Parliament convened at Old Palace Yard in the shadow of the House of Commons, in spite of the intermittent downpours of rain.

Lucy Will as ‘Queen of Green’ and a bewigged Nick Hutton as "speaker" provided a wacky spectacle, at the start, to grab everyone’s attention. But the speeches and discussion thereafter were at the cutting edge in defining the way forward in the fight to prevent catastrophic climate change. All this despite the rain and the slightly surreal ambience.

See our photo gallery of the event.

There were 4 “Bills”. Each one was introduced by our “government spokesperson” so that the starting point for discussion was what the government is actually doing – there was then a main proposing speaker for each bill followed by points from the ‘floor’.

Banning all domestic flights by the end of 2010 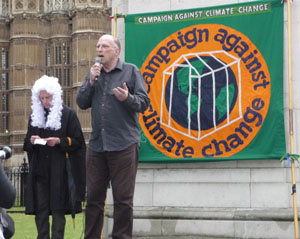 A million and a half Green Jobs

A 55 mph national speed limit and terminating the roads program

There were also speeches from Colin Challen MP, Darren Johnson, chair of the GLA (Green Party), Deepak Rughani from BiofuelWatch, Tamsin Omond who gave a resounding advert for the ‘Climate Rush’ and an ex-worker (brother of current worker) from the threatened Vesta's wind turbine factory.

100 + people endured the rain for more than 2 hours to listen and participate - there was the sense that this makeshift gathering was much further ahead of the curve - in terms of how we can realistically face up to threat from climate change, and what the future will really look like - than those in the imposing gothic edifice close by.

Earlier in the day, we staged a photo-op at which we delivered a “Climate Emergency” letter to Ed Miliband at his Department of Energy and Climate Change, just off Whitehall

You can still join the Online Emergency Parliament here. Give us your views on what the government should be doing to cut carbon fast.