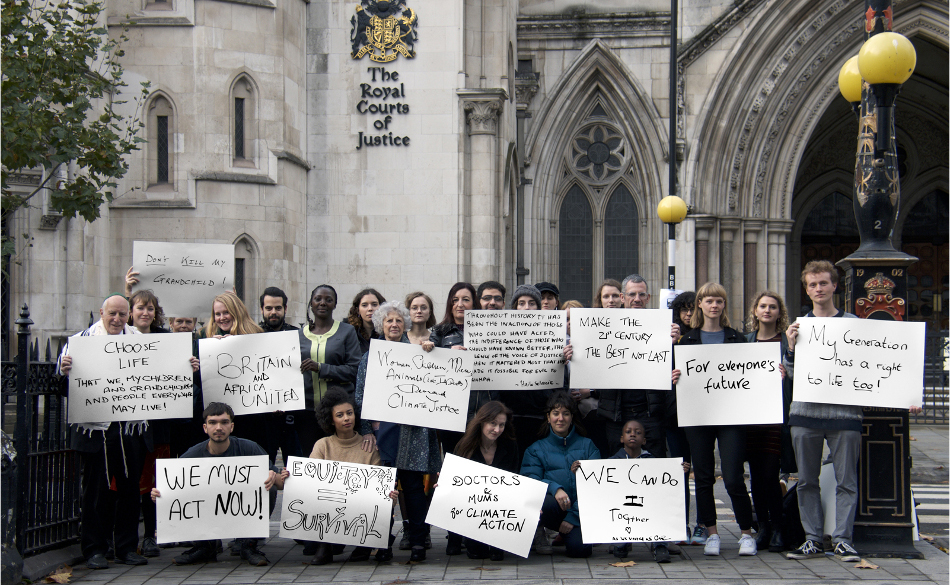 The High Court ruled against climate charity Plan B today (20 July) in one of the first major legal test’s of the Paris Agreement on climate change. The ruling blocks the path to a full hearing on the sufficiency of the UK 2050 climate change target, the basis for all UK climate change policy.

The charity Plan B and 11 UK citizens commenced legal action against the government for what they claim is a failure to revise the target in line with science and the Paris Agreement.

Following a hearing on 4 July, Mr Justice Supperstone has now issued a judgement, which states, contrary to Plan B’s understanding of the position of the Committee on Climate Change that: ‘I agree…that the Committee’s position was that the existing 2050 target is compatible with the Paris Agreement.’

Tim Crosland, Director of Plan B and former government lawyer, said: ‘We are surprised and disappointed by this ruling and will be lodging an appeal.

‘We consider it clear and widely accepted that the current carbon target is not compatible with the Paris Agreement. Neither the government nor the Committee on Climate Change suggested during our correspondence with them prior to the claim that the target was compatible.

‘Indeed, it was only in January of this year that the Committee published a report accepting that the Paris Agreement was ‘likely to require’ a more ambitious 2050 target. Moreover the Government acknowledged in these proceedings that it was ‘uncontroversial’ that the 2050 target was insufficient to meet the 1.5 ̊C target, one of the key aspects of the Paris commitment.

‘In these circumstances, Plan B and the other 11 claimants continue to consider that a full hearing on an issue of such urgent and vital importance is necessary. As with other legal campaigns confronting powerful vested interests it takes time to break through, and time is not on our side. We’ll be doing everything possible to accelerate the process. Wildfires raging in the Arctic Circle must surely be a wake-up call.’

The case has attracted strong support internationally. Leading climate scientist, James Hansen, whose testimony to the US Congress in 1988 raised the global alarm on climate change, has said the case ‘could have a big impact on the whole global situation’.

The government’s own former chief scientist, David King, has also expressed support for the action as has politician Caroline Lucas and a coalition of top doctors. Attorney General to HRH The Prince of Wales, Jonathan Crow QC, is one of the barristers representing the group in court.

The case seeks to compel the government to revise the UK’s 2050 carbon target, the anchor for all its climate change policies, and to specify a new one based on the latest scientific knowledge and the goals set out in the Paris Agreement.

It argues that Greg Clark’s failure to do so is inconsistent with the purpose of the Climate Change Act which is the to commit the UK to a fair contribution to the global temperature limit, irrational and a breach of human rights, including the right to life, the right to family life, and the right to property.

In 2008 the Climate Change Act set out a target based on the belief that limiting global warming to 2 ̊C would be enough to avoid the worst impacts of climate change. The situation has subsequently deteriorated and in 2015, Governments around the world adopted the Paris Agreement committing them to limiting warming to ‘well below’ 2 ̊C while aiming for a 1.5 ̊C limit.

Plan B and 11 citizens, aged 9 to 79, are represented by the solicitors, Jamie Potter and Ben Gaston of Bindmans LLP, and the barristers Jonathan Crow QC and Emily MacKenzie.

Ten years ago this year, the UK's Climate Change Act was passed, committing us to cut our greenhouse gas emissions by 80% by 2050 (compared to 1990). It was voted through with cross-party support and almost unanimously - a huge achievement. To ensure these are met, the government's official advisers, the Committee on Climate Change (CCC), have been setting 'carbon budgets' for each five year period towards 2050.

So, what's the problem?

First, the actual policies to cut emissions have not matched up to what is needed. The Committee on Climate Change recently published its progress report making this very clear. Although the UK has reduced CO2 emissions from power generation (largely due to phasing out coal) other sectors such as transport and home energy efficiency have generally failed to cut emissions at all. The UK is off track to meet its carbon budgets in the coming decades. The Committee is calling on the government to use the 'easy wins' (reversing the effective ban on onshore wind in England, for example), and commit to long-term policy-making and strong regulations.

Second, international aviation and shipping were officially excluded. The CCC worked around this by accounting for a limited allowance for aviation emissions within carbon budgets. But despite the committee's protests, government looks set to ignore this limit in future, allowing much greater growth of aviation emissions. This was recently rubber stamped by Parliamentary approval of a third runway at Heathrow.

Third, the targets within the Climate Change Act should be made more ambitious. These targets were set to align with a 50% chance of keeping within 2C. However, in Paris, countries around the world signed up to keep global average warming to 'well below 2C' above pre-industrial levels, and to attempt to keep it to 1.5C. For context, global average temperatures have already gone over 1C (which of course means some parts of the world have heated up much more than this), so this will be challenging, but vital if we are to avoid devastating impacts.

The Committee on Climate Change has noted that the UK's current targets are not ambitious enough to meet these goals, advising that in order to stand a 50:50 chance of meeting the 1.5°C aspiration, global emissions of CO₂ need to fall to net zero by the 2040s. . In April 2018, climate minister Claire Perry announced that she would ask the committee to examine the implications of the Paris Agreement for the UK's emissions reduction targets.

Meanwhile, a legal case is being brought against the government by a group of twelve citizens, supported by Plan B, a small charity. Their case seeks to compel the government to revise the UK’s 2050 carbon target and specify a new one based on the latest scientific knowledge and the goals set out by the Paris Agreement which the UK has advanced, signed and ratified.

The Climate Coalition is calling on MPs to support a net zero target ahead of 2050 - so far over 100 have signed up to their open letter - find out more and contact your MP.

The Centre for Alternative Technology has done a considerable amount of work on this in their Zero Carbon Britain reports. They present different scenarios. While some people may be alarmed at the thought of changes in diet (less meat and dairy) or travel (less flying), others may be inspired by the idea of a healthier, fairer society.

Net zero means that greenhouse gases are absorbed to compensate for those emitted. This can be done through land use changes - planting trees and restoring peatlands (woodland restoration is one of the key areas identified by the Committee on Climate Change report.

How quickly do we need to get to zero?

Given that we are already seeing impacts such as hurricanes exacerbated by climate change, coral reef damage and melting ice caps, one answer to that is "a couple of decades ago". A more sensible answer (but hard to enact in legislation) would be "as soon as possible". To be consistent with a high probability of keeping well below 2C, and fairly distributing the global carbon budget, we should probably be aiming to be at or near net zero by 2030. What is most important is that there is no delay in reducing emissions, since every year we continue to emit carbon dioxide at high levels uses up more of the remaining carbon budget.

The lack of a sense of urgency may be the biggest barrier we face to climate action. Of the MPs who had signed up to the Climate Coalition's letter on a net zero carbon target, over half voted for a massive increase in aviation emissions by expanding Heathrow airport. We have a long battle ahead.

Lord Krebs, former member of the Committee on Climate Change on net zero:

"For many scientists such as myself, who have seen the evidence of global warming accrue over the years, the question, 'can we?' is important, but ultimately subordinate to another: what are the implications of deciding it is not possible? Put simply, unless we do not do this, we do not stop climate change. And that, I would argue, is unacceptable."