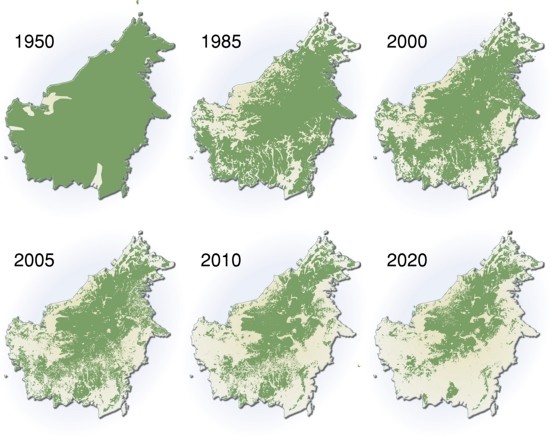 Video on the devastation of Sumatra's rainforest.

EU law says that by 2020, renewable energy must fuel 10% of the transport sector. Biofuel counts towards that requirement if it produces a 35% emissions saving over fossil fuels, or 50% from 2017 onwards; so far, most of that fuel has come from food crops. The problem is that at the moment emissions from indirect land use changes (ILUC) are not included. When agricultural land is used to plant biofuel crops, fresh land may be ploughed up to accommodate the existing crops that have been edged out. Ultimately, that may drive clearing of forests, peatlands and wetlands rich in sequestered carbon — causing large emissions of carbon dioxide. Read more.

New proposals are that these indirect land use changes be taken into account in calculating emissions and that food-crop fuel quotas be capped at only 5% of transport fuel by 2020. There has been very strong lobbying against the proposals and the Energy Committee has already voted to weaken them. There is a crucial vote on 10 July in the Environment Committee. Write to your MEPs now. It is particularly important to write to MEPs who are on the committee (see list below) and if you can do so in your own words, this will have more impact.

A new local group is campaigning to prevent the proposed use of bioliquids, probably palm oil, to light and heat the massive new development planned for the Battersea Power Station site in London. The new owners of the site include Sime Darby one of the world’s largest and most contentious palm oil companies. It owns vast plantations across Borneo in areas that used to be pristine forest, and is expanding not just in Borneo but also in Liberia, taking lands without any consultation with local communities.

Find out more about the plans

There is a public meeting on 10 July at local pub, the Bread and Roses, SW4 6DZ - see Facebook event page for more details.

In Cameroon, a US-based agri-corporation, Herakles Farms, is involved in a land deal that is about to destroy over 70,000 hectares (300 square miles) of rainforest. This plantation will have major impacts on up to 45,000 people who are dependent on the forest for their livelihoods. If the project goes forward, farmland and forest will be replaced by a giant palm oil plantation. Read more here and here.

Send an email to the CEO of Herakles Farms, demanding that the company drops its palm oil plans in Cameroon.