Last Thursday afternoon the Campaign against Climate Change (CCC) office jumped on a train and headed down to Balcombe, a small village in rural West Sussex.  Balcombe is a typical home counties village with winding lanes, a range of traditional cottages and houses centered around some of the most british of institutions, a tea shop and a pub. Adding an oil company into the mix may not seem the most obvious choice for this rural idyll.
As it turns out it is not only us at CCC who think that a drilling rig and this form of extreme energy is not right for the UK’s energy policy and not right for Balcombe. As more information has come to light regarding Cuadrilla’s plans for drilling and the local people have become better informed of the dangers associated with fracking, tensions have gradually risen to breaking point. 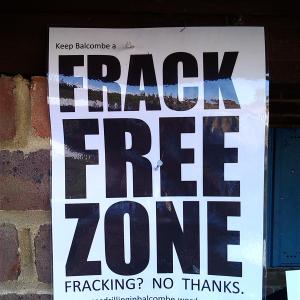 We arrived with a banner in support of the Balcombe residents and joined the fray.  The village had clearly come out in great numbers, from small children to grandparents, to support each other and to show Cuadrilla that they have the strength in numbers to oppose the drilling rights and fight any plans that Cuadrilla have.

Although the day was based around a ‘drop in centre’ held by Cuadrilla in order for local residents to air their grievances, the Balcombe population had organised a host of activities and small demonstrations to show Cuadrilla how they felt and that they would not be silenced in their opposition. In a slight backfiring of their PR attempts the presence of so many suited Cuadrilla personnel seemed to incense everyone all the more.  The events held included a kids picnic, knitting nanas making a range of bright knitwear and cupcakes with a host of anti-fracking slogans. Although maybe not the most conventional methods for a protest, the village united in a friendly atmosphere providing a host of opportunities for news crews to capture the feelings and give the global publicity Cuadrilla so desperately wants to avoid.

As representatives of CCC we were there because fracking, not just in Balcombe, but across the UK threatens the government's pledge to cut emissions and is not a real energy solution. While speaking to local people it was heartening to find out that much of their opposition was not, as is often reported, so called ‘nimbyism’, but because they are also worried about climate change, that we should be moving forward towards renewable energy sources and not backwards by continuing to rely on fossil fuels.
A recent poll in the village had revealed that 82% of villagers opposed fracking in Balcombe, from the Balcombe residents that we met and talked to last week, that number seemed completely justified.  If the people of Balcombe, along with support from a network of anti-fracking groups, continue to resist so strongly to Cuadrilla’s plans Balcombe could become a landmark example for the UK in preventing extreme energy solutions from dominating the UK’s future energy policy.
Share this page on Facebook and Twitter