Act for the Amazon 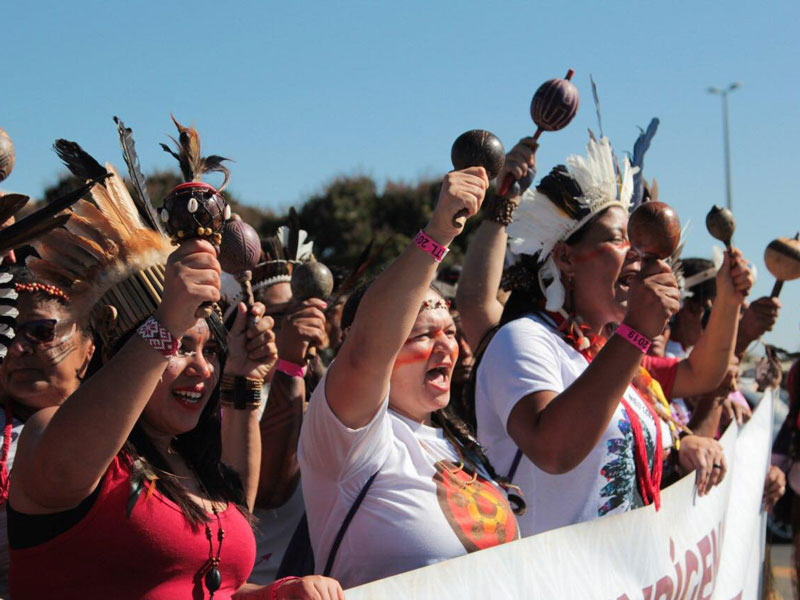 Large areas of the Amazon rainforest are on fire, waking up the world to a calamity: no natural disaster, but part of a long-running strategy of destruction and exploitation. Bolsonaro came to power, following the imprisonment of former president Lula on corruption charges, with a clear agenda to dismantle the protection of indigenous lands. He once said, “It’s a shame that the Brazilian cavalry hasn’t been as efficient as the Americans, who exterminated the Indians”.

The current fires were set deliberately to clear more land for agriculture, in particular cattle ranching, which is responsible for 80% of deforestation in the country. Deforestation in the Brazilian Amazon has increased by two-thirds during Bolsonaro’s presidency.

Indigenous people have as ever, been in the frontline of resistance, defending their land rights. The picture above is from the Indigenous Women March on August 13th, when almost 3000 indigenous women travelled from across Brazil to the nation's capital.

What can we do here in the UK?

The causes of the destruction are closer to home than you might think. The export market for commodities, in particular Brazilian beef, is driving deforestation. Europe is Brazil’s second biggest market for beef sales. The recently signed EU-Mercosur agreement between the EU and Brazil, Argentina, Paraguay and Uruguay would open EU markets to more beef imports in exchange for the export of EU cars, especially highly fuel-intensive SUVs. But the deal still needs to be approved by the European Parliament, and pressure is growing to block it.

As your constituent I am writing to you to ask you to do all in your power to protect the Amazon rainforest and the land rights of its indigenous peoples, whose future hangs in the balance. The current devastating fires are just part of a long term strategy by Bolsonaro's government to undermine current legal protection and open up the lands to exploitation by agribusiness. As a major export market, Europe has the power to hasten this destruction or prevent it. As my MEP I am asking you to work towards the following measures to protect the Amazon, as a matter of the utmost importance for all our futures.

I look forward to hearing from you.

Action: Write to your MP

The UK government seems to be cosying up to Brazil's far right government in desperate pursuit of post-Brexit trade: as the fires in the Amazon raged, junior trade minister Conor Burns drank champagne with Brazilian minister Marcos Troyjo, who has openly backed Bolsonaro’s policy of deforestation of the Amazon.

Example email (again, you can contact your MP through writetothem.com).

As your constituent I am writing to you to ask you to do all in your power to protect the Amazon rainforest and the land rights of its indigenous peoples, whose future hangs in the balance. The current devastating fires are just part of a long term strategy by Bolsonaro's government to undermine current legal protection and open up the lands to exploitation by agribusiness. It is vital that the UK's desire for trade after Brexit doesn't make it a collaborator in this by providing an open market for these goods. Please help ensure that no future trade agreements are signed which do not include effective provisions to end deforestation, respect customary tenure rights, and implement the Paris Climate Agreement. Products sold in the UK also need to have mandatory supply chain transparency to ensure this.

The UK must also play its part in monitoring  human rights violations and providing direct, urgent support to indigenous peoples who are putting their lives at risk to defend the forest and their land rights, including through political representations.

I look forward to hearing from you.

Follow organisations such as Amazonwatch to find out about further actions you can take in solidarity with indigenous forest defenders, in Brazil and in other countries. The actions taken by community leaders can put their own lives at reach, so it is vital to amplify their voices.

This detailed report by Amazonwatch describes how investors and companies, some based in the UK, are implicated in Amazonian destruction through the trade in commodities: beef, soy, leather, timber and sugar. It provides suggestions for how campaign groups and NGOs in particular can challenge these.