Demonstration against US, Climate Treaty Wrecker

Demonstration against US, Climate Treaty Wrecker 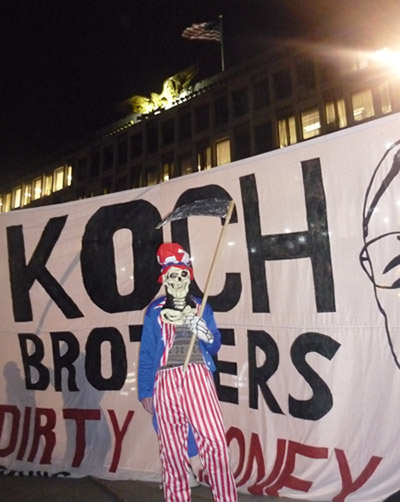 Outside the US embassy, Grosvenor Square

On Friday evening as the negotiators in Durban were wrestling with the text of a new treaty a dedicated bunch from the CCC - including one participant who had come all the way from Paris ! - were out in front of the US embassy hghlighting the obstructive role played by the US in the negotiations - and the role big corporate money  had in this, moulding the politics of climate change in the US.

Whilst we now have some sort of agreement coming out of the Durban Talks (in itself a good thing) the fact that it is such a weak agreement embodying a terrifyingly low level of ambition from the developed countries most responsible for the climate crisis, has a great deal to do with the role played by the US in the negotiations - over the last ten years as well as at Durban, itself.

For more on why the US is most to blame see the Friends of the Earth International verdict on the Durban Climate Talks here.

Barely noticed by much of the media the Climate talks in Durban, South Africa are, entirely predictably and as expected, heading for near-total failure, as the one 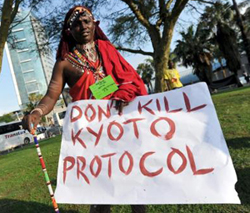 legally binding treaty on climate we have, or have ever had, runs out.

Contrary to the low media profile this failure is one of awesomely vast significance – already to many of the world’s poorest but ultimately to the whole global community. Not only that but this is not happening as a blameless ‘act of God’, it’s a failure caused by people, and by some people more than others. 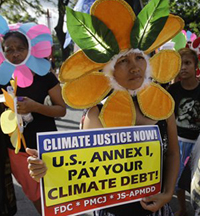 We’re targeting the US because they are part of the rich developed world with high per capita emissions and  high historical responsibility. Out of the developed nations they are outstanding as never having even signed up to (let alone fulfilled their obligations under) the world’s only emissions reductions treaty  - the Kyoto Protocol – and are busy leading the charge to kill it dead right now. They are leading the resistance to any treaty with binding targets within a timeframe which might allow it to do any good. Certainly Canada and Japan are not far behind the USA and targeting the USA does not mean others are blameless, but it is a statement about where the biggest responsibility lies.

We will raise our giant 8 x 4 metre banner condemning the Koch Brothers and their “dirty money”  outside the embassy as a way of suggesting who within the US we hold most responsible (the extreme right and their corporate funders) …but Obama has made no strong stand on climate, despite his election rhetoric, and nor has the US kept out of the way in the UN negotiations to allow others to make progress (which the US might join in with later…).

For US responsibility see for instance (as a very small sample) here,  here  and   here 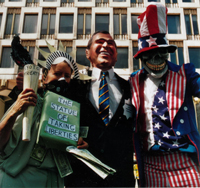 Finally….. look how much things have changed (not) since the CCC started in 2001 attacking the US for..........trying to destroy the Kyoto treaty…..See here.and here

Its largely because developed countries (certainly the US, Canada....) have failed to show commitment in making a real start on emission cuts under Kyoto .....that developing countries are now so distrustful and unwilling to commit themselves to binding cuts under a broader treaty now....