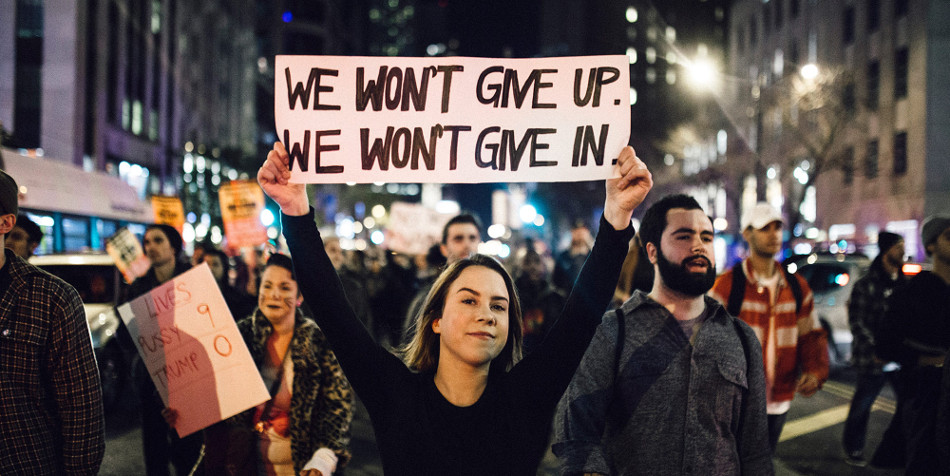 On 20 January, Donald Trump will be inaugurated as President of the USA. There is no question that this is a disaster for our climate. His political appointments have made this clear, with a cabinet stuffed with climate change deniers and fossil fuel cronies including the CEO of Exxon Mobil, Rex Tillerson as Secretary of State.

There are huge links between Trump's climate denial and his racism. Climate failure will hit the poorest and most vulnerable around the world first and most dangerously. Even in the US, we've seen with Hurricane Katrina, at Standing Rock and in the Flint water crisis how people of colour and indigenous communities are disproportionately affected by climate change and are seen as 'sacrifice zones' for the fossil fuel industry and other environmental pollution.

Activists in the US have called protests for the day of his inauguration. Join us around the country to stand in solidarity with them. There will be traditional protests and also banner drops from bridges demonstrating solidarity and rejection both of Trump and fascism.

Do check out banner drops on the Bridges Not Walls website as well as the events below - more are being added!

Campaign against Climate Change are organising a climate bloc at the mass rally outside the US Embassy in Grosvenor Square, London from 5pm.

There will also be protests in Trafalgar Square.

In the morning of 20th January there will be 'Bridges Not Walls' banner drops on ten bridges across the Thames, from Tower Bridge to Vauxhall. Find out more about how to get involved.

There are banner-making sessions for Bridges Not Walls this weekend (14-15 Jan) and for the climate bloc at the US embassy on Thursday 19th.