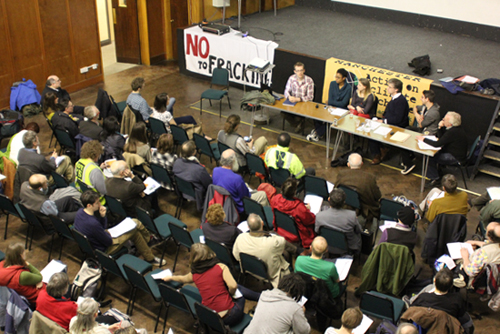 Organised by Campaign against Climate Change with REAF, The Vale Says No, Frack Off and No Fracking in Sussex (find out more about fracking here)

The Gathering was a great success with more than 70 attending and more importantly representatives from anti-fracking groups all around the country ..... from REAF (Ribble Estuary, Lancashire), RAFF (Blackpool area, Lancashire), The Vale Says No (South Wales), No Fracking in Sussex (Balcombe and Lewis) and from Kent, Scotland, Northern Ireland and the Republic of Ireland.

Also present were activists from Frack Off and The Campaign against climate Change, Tony Bosworth from Friends of the Earth and Justin Woolford speaking on behalf of the Co-operative Society, whilst the meeting opened with a presentation from John Broderick from the Tyndall Centre

The most significant outcome of the Gathering was the formation of the British Isles wide Anti-Fracking Network.

The Gathering also featured reports from 8 local areas around the country and Workshop Sessions that included: 'All you need to know about fracking: General Introduction' by Will Cottrell from 'Frack Off'; 'Stop the frackers in your area: Planning and legal issues' with Laura Gyte from the FOE legal team, Andy Chiba from The Vale Says No and Felicity from TOOKS Chambers; 'Frack Free Zones and other useful campaigning initiatives' with Justin Woolford and Tony Bosworth from FOE; 'Extreme Energy' by Frack Off; Direct Action workshop by Frack Off - and finally a Presentation on fracking, coal bed methane and the companies pushing these by Paul Mobbs.

Activists from the all around the country left the Gathering better linked up than ever before,  with a new sense of the strength of the nation-wide movement and buoyed up by a sense of common purpose for the fight ahead....

Weight:
7
‹ ICEBERG AT THE LIB DEM CONFERENCE up One Million Climate Jobs Caravan ›