First Organising Meeting for National Student Climate Occupations, in association with the COP21 in Paris

Updates on event past and current:

Other bits and bobs:

Climate Change in the news

More ways to get involved! 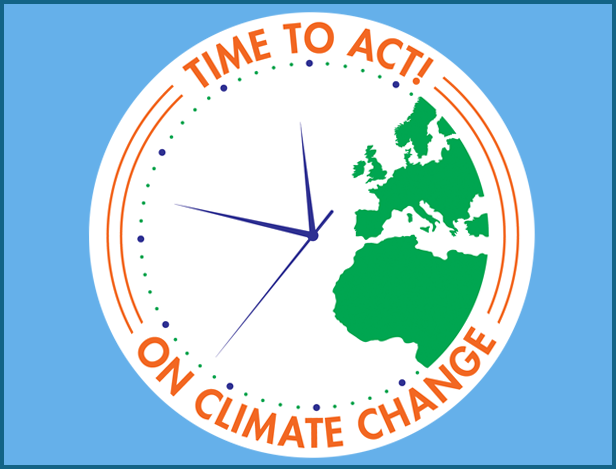 As I’m sure many of you are aware, our actions this year have been led by our aptly named Time to Act campaign.

This Tuesday 10th June, we’ll be holding our Time to Act Climate Change Meeting. The purpose of this is to provide an environment to bring together anyone working on climate issues, so that we can all share what we are currently working on, and to find key moments within our campaigning where we can support each other. This is not limited only to those working on climate change, but also includes volunteers, supporters, and members of different campaigning organisations.

The meeting is on 10th June from 7-9 pm in the October Gallery (24 Old Gloucester St, Bloomsbury, London WC1N 3AL).

As a community we are many, but we are often spread out. By working together we can have the public presence that we know we should have.

The programme for the evening

Film: A short film on the Time to Act campaign so far, with statements from supporters.

What's happening: A space for everyone who represents a group or organisation to have time to share what they are currently working on.

Time To Act: Fiona Brookes will briefly talk about the background to the Time To Act campaign. Fiona will also speak about COP 21 and our plans to mark it, and events already planned within the this campaign.

March 7th 2015, Mobilisation and Carnival: Peter Coville (CCC Steering committee member) will give a presentation on the mobilisation, talk about how people can get involved, and will be taking questions afterwards.

First Organising Meeting for National Student Climate Occupations: In association with the COP21 in Paris - Dec 2015

In 2015 the 21st Conference of Parties will be taking place in Paris. Students in Paris will be occupying their universities on Monday 7 December, and on the Tuesday they will be dancing out of the colleges onto the streets and asking everyone to join them.

As a result Students from Oxford, Cambridge and Warwick are calling for action at the time of COP21 in Paris 2015.

CCC is organising a meeting to discuss plans to occupy and other actions at the time of COP21. The meeting will be a chance to talk to other student groups about what obstacles there might be for these actions, and how we might overcome them.

Climate change is serious, and the leaders of the world are not acting. We must come out of Paris in a spirit ready to carry on the fight for the Earth. More information on how to get involved with actions or start your own, is on our website.

Join us next Sunday June 15th at 3pm, for the grand finale of the theatrical protest group the Reclaim Shakespeare Company’s pop-up protests, targeting the BP-sponsored British Museum with a piece of mass interactive theatre.

This is the last in a series, but surely not the last protest against the British Museum’s heavily BP-branded Vikings Exhibition.

With your help, the company is planning to bring a Viking inspired longship into the Great Court of the Museum, in order to give BP a Viking funeral.

No experience of ship-building or transportation is required, and there will plenty of roles that don’t require heavy lifting.

To sign up for the action, email info@bp-or-not-bp.org and they will send you a short message with some simple instructions for your part in the performance. Learn these instructions and then be in the Museum at the appointed time to join the horde. You don’t need to dress as a Viking (although this is very much encouraged). You can also show your support by “joining” this Facebook event: https://www.facebook.com/events/811387198874308

David Cameron wants to change the law so fracking companies can drill under our homes without permission.  But the plans can’t go through without MPs votes, so if we can get them to see how unpopular Cameron's idea is, they'll think twice before voting it through when the time comes.

Sign now and leave a comment for your MP. We'll include them when we deliver the petition, and we've teamed up with Friends of the Earth to increase our strength.

To get involved in more actions check out our Take Action Now page.

As part of our Time to Act on climate change campaign and as part of our mobilisation leading up to the COP talks, CCC will be leading a march and carnival with the support and involvement of a myriad of different organisations, supporters, and volunteers.

There will be five different blocks, each leaving from a different location, with speeches and action(s)/stunt(s) at each location. The blocks are: Jobs & Transport; Energy; Food; Water; Finance. Each block will have a giant prop inspired by it i.e. Water= Giant tap etc, and action attendees will carry and set off ringing alarm clocks outside of Parliament.

After the speeches and actions every block will head towards parliament, initially converging at Ludgate before continuing the march together to Parliament. Provisions will be made for those who have difficulty walking long distances.

There will also be a big board with the demands, so it is clear to everyone why we are there. Afterwards there will be live music and poetry.

More information on the action will be given at the Time to Act Climate Change meeting on Tuesday 10th June.

It was highlighted at the AGM the block Biodiversity/species loss was missing, and it needs to be included. Ideally it should be integrated without adding another block, possibly by combining two of the other blocks – Attributed block name: Natural world.

If anyone has suggestions on how to integrate a Biodiversity/species loss block without adding a sixth block please get in contact with us at: info@campaigncc.org with the subject heading Biodiversity block.

Reel News will be hosting a talk at Glastonbury this year, on Thursday 26th June; 1:00pm. The talk is on climate jobs and will include talks and discussions on the top.

If you would like to attend or for more information please email Reel news at info@reelnews.co.uk with the subject Fliss Premru: Glastonbury – Climate Jobs.

Organised by the People’s Assembly Against Austerity, this is a good opportunity to show solidarity between climate and economic justice activists, and build stronger links within our movements.

The march is a stand against austerity and will start from the BBC’s London Headquarters, culminating outside Parliament. Meet at 1pm, BBC HQ, Portland Place, the nearest tube station is Oxford Circus.

Coaches are being organised from across the country - get in touch with your local People's Assembly group for transport details: http://www.thepeoplesassembly.org.uk/local-groups

If you are not able to attend, please do sign their petition: http://www.thepeoplesassembly.org.uk/peoplespetition

For more information, head to the people assembly’s website.

Reclaim the Power and No Dash For Gas will be hosting an action camp later on this year, from the 14th – 20th August. It will

be held at a fracking site, the exact location and travel information will be revealed nearer the time, in order to keep the fracking industry in suspense.

Through this action camp, you will be supporting a community on the frontline, fighting fracking, and joining the dots between

climate, social and economic justice. Alternatives to fracking exist, a million climate jobs could be created from alternatives,

demands on energy could be reduced, and individuals could convert to community and publicly owned renewables.

At the camp you will share skills, meet friends, participate in workshops and take mass civil disobedience.

Get involved and get inspired - let's take on the Frackers and win!

Updates on events past and current: 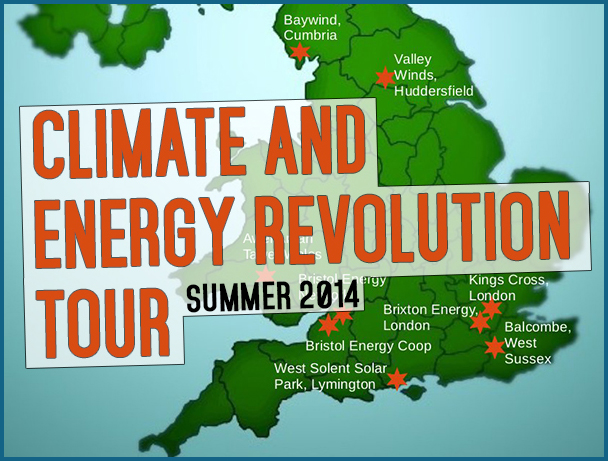 In the middle of all this we've also begun our climate and energy tour.

The objective of this tour is to make a film promoting community energy projects that take back power away from corporations and Government, whilst tackling climate change. We want to show that renewable energy really works, and use the film as a campaigning tool that highlights renewable energy as a solution to climate change.

The end result will be a film called Time To Act on Climate Change: Join the Energy Revolution.

We hope to inspire people who see this film to take action in their own communities, drawing confidence from the projects they see in this film. As well as giving much deserved recognition to the people who are leading the way in this energy revolution.

I, Leia, have been writing blogs about our experiences so far, and they are up on our Climate & Energy Revolution Tour page.

Last weekend on Saturday 31st May we had our 2014 AGM, at University of London Union.

There were a lot of new faces, and some old faces from a few years ago who we haven’t seen in a while. It was great to reconnect with supporters, and to also connect with new supporters and other interested parties.

We got through a lot in the AGM, and amongst other things elected a new steering committee, presented the logistics of the March 7th march, and updated the meeting on the Time to Act campaign. The full minutes from the AGM can be downloaded from here. 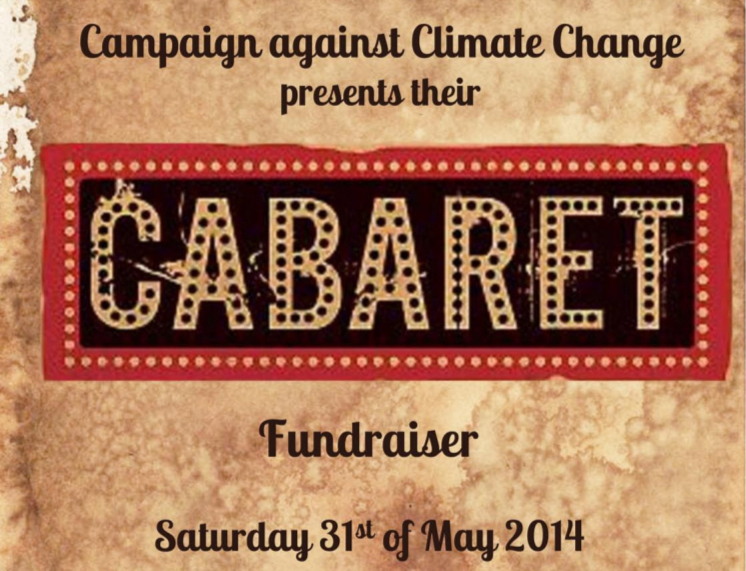 An immense thank you to everyone who came to our Cabaret Fundraiser last Saturday after the AGM; the fundraiser proved to be a great destination for allowing everyone to talk, have fun, and unwind after the AGM.

The Cabaret night had something for everybody, the acts were fantastic, the food was tasty, and the drinks were flowing. The night included performances from Anna Chen, Charles Shaar Murray, Pete Deane and Marie McCormack.

It was a great night that additionally allowed us to raise funds which will help our organisation to continue tackling the problem of climate change.

Thank you to everyone who came and helped us while the night away, and raise funds!

Climate Change in the news:

Totally rubbish: Britain risks turning into a nation of wasters

Climate change will hit price of cereal and household basics next, report claims

More ways to get involved!

Please consider making a regular donation, if you don't already. We are a small organisation and need the financial security which helps us respond to events as quickly as possible. (Could you help fundraise for us? Get in touch!)

Could you please forward this email to any friends who may be interested? Thank you.