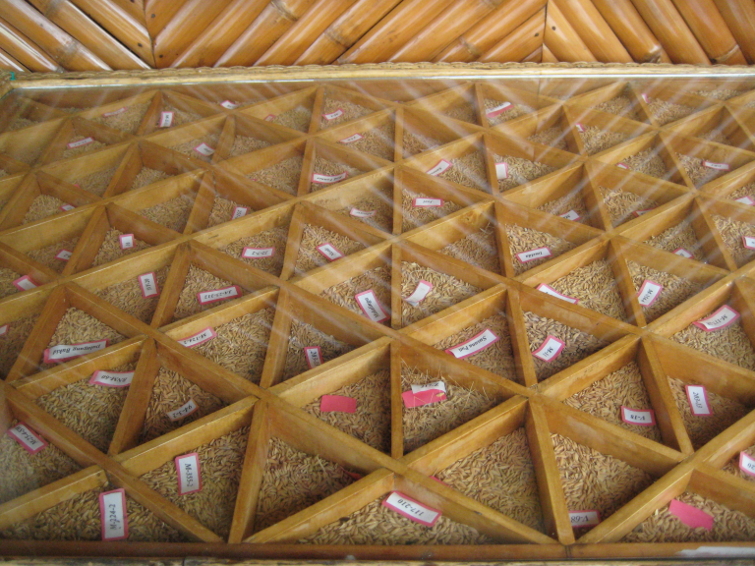 ‘…there is compelling case that the current global food system, propelled by an increasingly powerful transnational food industry, is responsible for around half of all human produced greenhouse gas emissions: anywhere between a low of 44% to a high of 57%”.i

As human beings, we consume an inordinate amount of food every day – where does it come from? If we ask ourselves this simple question, do we get a simple answer? Do we even know the answer? My guess is that, unless you produce all of the food you eat yourself or, even better, as part of a food cooperative, you are probably sourcing your food from one of the big retailers (Tesco, WalMart, Albert Heijn, etc. – depending on where you live) and, therefore, do not know much about the food you are about to consume – where it came from; how it got there; how it was produced; who produced it? Come on, be honest!

As cited above, a recent report by Grain (2011), Food and Climate Change: The Forgotten Link, which utilises statistics on global food production (note food, not biofuel production – a massive industry in itself) and the supporting value chains (which allow soya-fed beef slaughtered in Argentina on Friday to be readily soaked in gravy and on your plate before the footy starts on Sunday, for instance), concludes that we should be paying much more attention to where our food comes from and, indeed, what this means for global greenhouse gas emissions (GHGs).

Most reports, when they discuss the share of global GHGs between industries, tend to focus solely on the agricultural production process itself and the GHGs therein – the US Environmental Protection Agency, for example, puts it at 14%, the IPCC at 10-12%, the OECD at 14%, and the WRI at 14.9% (an average of 11-15%)ii – most of which can be attributed to the use of heavy, fossil-fuel intensive machinery, along with the application of petrochemical fertilisers, pesticides and herbicides (that rob more from the soil than they put in), typical of both large- and small-scale farming. For Grain, and for many others, however, this is just the starting point of the global value chain of food production that stretches from farmer to fork; one must consider all of the industries that are linked to global food production and, therefore, the GHG emissions therein: land-use change/deforestation, transport, processing and packaging, refrigeration, retail and food waste.

Take, for example, the expansion of palm oil production in Indonesia – by 2008, 7.3 million hectares of land had been dedicated to palm oil production, with plans for a further 20 million; expansion results not only in the destruction of the Indonesian rainforest, along with the habitats of the Sumatran tiger and orang-utan, but also the burning of the land, often initiated by the owners of oil palm plantation looking to expand their operations,iii along with the draining of the peat bogs, all of which emits an immense amount of carbon dioxide into the atmosphere.iv Indeed, according to the Grain report, the expansion of land used for agriculture, and consequent deforestation, contributes approximately 15-18% to global GHGs.v

Furthermore, in a world of neoliberalism where regulation of the economy is considered an archaic fetish of Keynesians and the only way forward, ostensibly, is the opening up of markets to the free movement of capital and, hence foreign direct investment (FDI), transnational corporations (TNCs) have come to dominate the landscape of food production. Helped along by those institutional hegemons – the IMF, World Bank, WTO, FAO – TNCs, such as Monsanto, Del Monte, Nestle, Cargill, Dole, etc., are able to invest in and gain access to the agricultural lands of the global South, coercing developing nations into gearing their economies towards an export-driven logic of seeking out FDI at any cost, social or environmental. As a result, TNCs have been able to monopolise the global food trade and become the driving force behind its production and distribution.

It will come as no surprise, then, that the transportation of food commodities around the world accounts for between 15 to 18% of global GHGs; in addition, they require: processing and packaging (all you need do is observe the ridiculous amount of plastic used to wrap a sausage roll these days!), which accounts for 8-10% of global GHGS; refrigerating during transit (a further 3-4%); if profits are to be realised, the commodities will need to be distributed by retailers to unquestioning consumers (1-2% of global GHGs); and, by the time the food finally gets to our plates, much of it has been wasted on the way, or, indeed, thrown away with yesterday’s bad news, ready to rot on rubbish heaps and emit inordinate amounts of carbon dioxide, methane and nitrogen into the atmosphere, contributing a further 3-4% to global GHGs.vi Thus, according to Grain: “the current global food system, propelled by an increasingly powerful transnational food industry, is responsible for around half of all human produced greenhouse gas emissions: anywhere between a low of 44% to a high of 57%”.vii 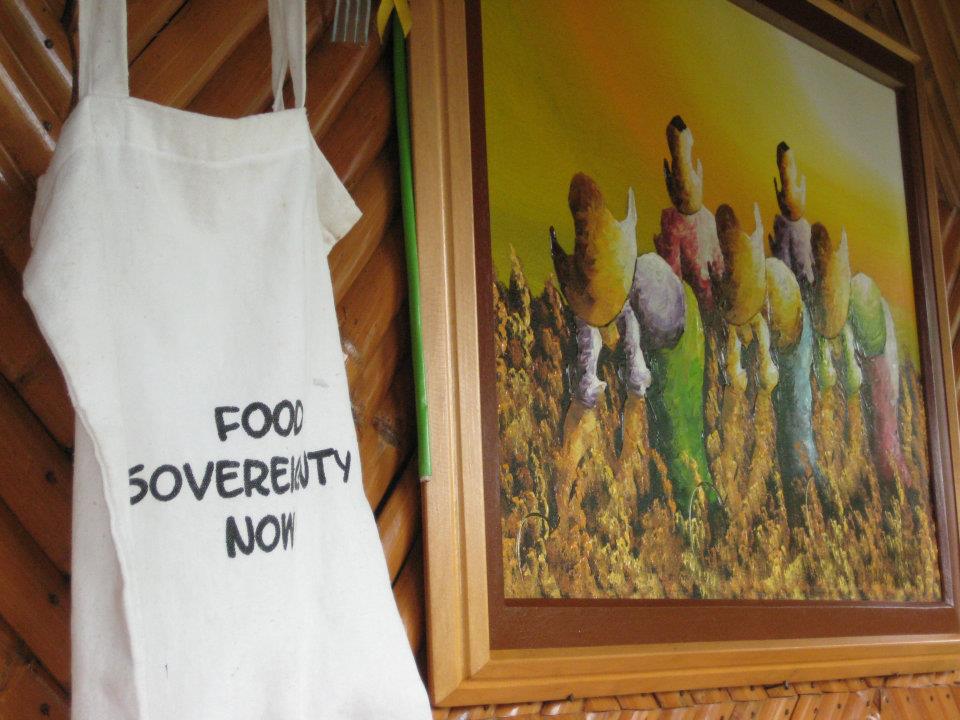 There is, therefore, a great deal of reason why we should be focusing our energies upon the global food trade: where it comes fr

om, where it goes, who is affected, who benefits, and how does climate change fit in? Indeed, if one takes the matter seriously, and one should, there is a necessi

ty to engage with the people and the social movements of the Global South – this is where the majority of the world’s food is produced (mostly by women)viii and, therefore, this is where the majority of progressive change is likely to come from. To do otherwise is to undermine the need for a global solution to a global problem. There are, for instance, many civil society organisations, both in the UK and abroad, that are concerned with promoting the principles of food sovereignty, agroecology and the localisation of food production as alternatives to the global sprawl of capitalistic agribusiness, its over-exploitation of environmental resources, and its tendency to expropriate small-scale farmers of their means of livelihood by expanding and centralising production on an ever-increasing scale and, in the process, alienating the very people that have the both the knowledge and skills to ensure the that food is produced in line with the natural cycles of the planet. Indeed, it is only in supporting the small-scale farming and peasant-based movements of the Global South that we stand any chance of reversing these trends.ix

It was in this spirit, then, that I (as CCC’s International Coordinator) attended, first, a conference organised and agitated for by European Coordination Via Campesina (ECVC), European United Left (GUE/NGL) and the Hands off the Land Network (HotL) – in conjunction with the Transnational Institute (TNI) – on the phenomenon of land grabbing in Europe; and, second, a conference on agroecology organised by the European Network of Scientists for Social and Environmental Responsibility (ENSSER) – both of which took place at the European parliament in Brussels recently. Although organised separately, the two conferences were joined by a common focus: the belief that capitalist methods of agricultural production are, first, excessively intensive; second, have a tendency towards expansion; and, third, can be counteracted by investment and research into small-scale, localised and agroecological production as an alternative. The ECVC conference, for example, was, first and foremost, an attempt by a peasant-based social movement to resist the expansion of land grabbing in Europe, particularly in the East, where investors are buying up vast tracts of land in order to propagate industrially intensive monocultures; a small percentage of investors are seeking out shale gas (as if it were in vogue to be a ‘fracker’). Besides some impassioned speeches from the floor, along with an interjection from myself on the unashamed advocacy of large-scale farming by a member of the European Commission (who tempestuously cut me off), there was much talk of building a regional network against this onslaught of industrial farming, along with the need for agroecological production methods – I’ll be keeping an eye on developments here.

Likewise, the (somewhat more scholastic) conference on agroecology, organised by ENSSER, was concerned with exploring the alternative social models that could be built in the face of expanding, capitalistic methods of agriculture – food sovereignty, food cooperatives, re-localisation of production, the science of agroecology, etc. – it involved academics, members of different social movements, European Commissioners and, unfortunately, research institutes merely there to sniff out funding for their next big project. In contrast to the ECVC conference, this one was geared more towards increasing the amount of research into the practice and proliferation of agroecological farming methods rather than active resistance and, as a result, was keen to build a communicative network; thus, the ‘Platform for Knowledge Exchange on Agroecology in Europe has been established, with the Campaign against Climate Change as an active member. Again, I will be watching developments here very closely.

International Coordinator for the Campaign against Climate Change (CCC)

iii Readers may remember the recent forest fires in Indonesia that are an annual occurrence. See: https://www.theguardian.com/environment/2013/jun/24/indonesia-forest-fire-malaysia-singapore

viii Esther Vivas, 2011, Without women there is no food sovereignty, https://esthervivas.com/english/without-women-there-is-no-food-sovereignty/.

ix See Grain (2009), Earth Matters: Tackling the Climate Crisis from the Ground Up, https://www.grain.org/article/entries/735-earth-matters-tackling-the-climate-crisis-from-the-ground-up; and La Via Campesina (2010), Sustainable Peasant and Family Farm Agriculture Can Feed the World, https://viacampesina.org/downloads/pdf/en/paper6-EN-FINAL.pdf.

‹ International Articles up Haiyan: Inside each Newborn Violent Storm is the DNA of the Fossil Fuel Industry and Capitalism ›