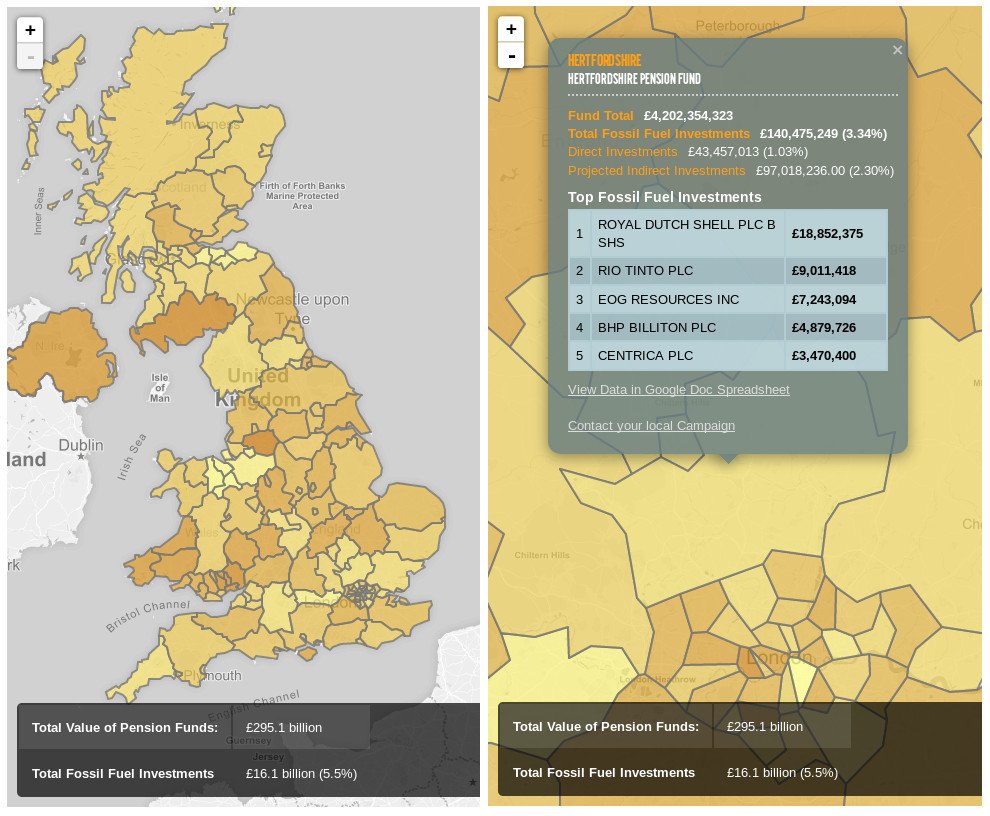 The global movement to divest from fossil fuels has seen some great successes, which you can read about below. There is still however lots to do....

Although the proportion of the Local Government Pension Scheme has slightly decreased from 2015-2017, the scheme has in fact grown in value, meaning its total investment in fossil fuels has shown an increase of £2.3 billion. The worst offender turns out to be the Greater Manchester Pension Fund, who invest 1 in every 10 pounds in fossil fuels and have the largest overall investment of £1.8 billion. Manchester is followed by the West Yorkshire Pension Fund and the Strathclyde Pension Fund respectively. On the opposite end of the spectrum is the Orkney Islands, who only invested £5 million in fossil fuels in 2017.

By investing in fossil fuels, the local government is essentially profiting from climate change. This conflicts with the purpose of local governments to work for the public good and undermines the existing local authority climate change mitigation and adaptation strategies and commitments.

In September 2016, London Borough's Waltham Forest's pension fund committee became the first UK public authority to announce its commitment to go 100% fossil free. All £23.9 million, that was invested in fossil fuel companies, will be divested to invest in sustainable energy, transport and housing. The UK's second largest city, Birmingham, has also voted to divest its pension funds.

Find out what your local council has invested in fossil fuels (and link up with your local divestment campaign) by using this interactive mapping tool. You can also read the full 'Councils, Fueling the Fire' report here.

It isn't all bad though, British Universities are leading the way in terms of divestment. The University of Glasgow became the first University in Europe to fully divest from fossil fuel industries in 2014. Glasgow University plan on reallocating around £18 million of current investments over a 10 year period. In 2015, the University of Surrey Finance Board followed suit and voted to sell its fossil fuel investments.

The power of the students has made a resounding impact on Oxford University, too. The university's decision not to divest was met with opposing demands from students, staff and alumni; notably, some of the latter of which, including George Monbiot, were preparing to hand back their degrees if a different decision was not made. Following this, however, a partial U-turn has been made on divestment pledges from a full rejection to a commitment not to invest further coal and tar sands, but no direct commitment to divest from fossil fuels entirely. Baby steps...

In August 2017, People and Planet and the National Union of Students (NUS) announced that over one third of Universities in the UK have made fossil free commitments, meaning that 54 Univeristy Instiutions in the UK have now taken actions to exclude fossil fuel companies. You can read more about which UK Universities have divested here.

In July 2017 the trade union UNISON voted in support of divestment of local authority pension funds. UNISON is one of the two biggest trade union groups in the UK, with over 1.3 million members, and is also the primary representative for local government workers, whose pension funds are collectively worth over £200 billion. Then in September 2017, the TUC also passed a motion on climate change action and public ownership of energy, which agreed to "investigate the long-term risks for pension funds investing in fossil fuels, promote divestment, and alternative reinvestment in the sustainable economy"

Find out more about trade unions and divestment 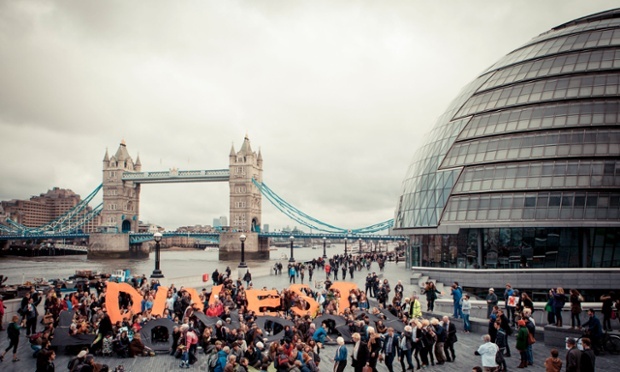 The support for the international divestment movement has been staggering. In May 2015, Axa, the global insurance giant, has committed itself to a tripling of its investments into green technologies whilst simultaneously divesting a whopping £350,000,000 of its assets from coal companies, and its fund management arm recently committed to divesting a further £157 million from coal.

And in June 2015, Norway pledged its commitment to divesting from coal investments from its sovereign wealth fund: around a whopping $8 billion! The move will affect over 122 companies worldwide. This comes as the largest divestment pledge yet, and with it comes hope that it will set the tone for future divestments of equal or greater measure.

You can visit sites such as Fossil Free and 350.org for more information on the fossil fuel divestment movement.

Find a campaign to divest your local council

Find your university campaign with People and Planet

Ask your MP to support the campaign to divest the Parliamentary pension fund from fossil fuels.

Find out more about how you can divest your bank account, energy supplier and pension fund from fossil fuels.