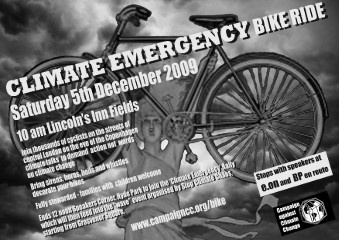 On the day of the climate demonstrations 250 cyclists started the action early and took the streets on a loud and colourful bike ride to demand emergency action on climate change from the government.

Starting off at Lincoln’s Inn Field, Alexis Rowell, Green Camden Councillor and founder of Cutting The Carbon, gave her support. There was then a stop-off at the BP headquarters where Maryla Hart of Food Not Fuel spoke about the corporation’s investment in agrofuels, before Jess Worth of the New Internationalist demanded an end to their funding of the destructive Canadian Tar Sands industry. Later, there was a short rally at the headquarters of climate criminal E.ON against new coal-fired power stations.

Cyclists then made a grand arrival at the Climate Emergency Rally at Speakers’ Corner to hear more rousing speeches from Caroline Lucas MEP, John McDonnell MP, John Stewart [HACAN] as well as others including Simon Hughes MP who himself came on the ride.

But the pedal-power hasn’t stopped there. Two CCC supporters carried on after the rally and are cycling 280 miles from London to Copenhagen to join the demonstrations there. Keep up support on their Facebook group page here.