Why join Biofuelwatch to #AxeDrax on the 20th April? 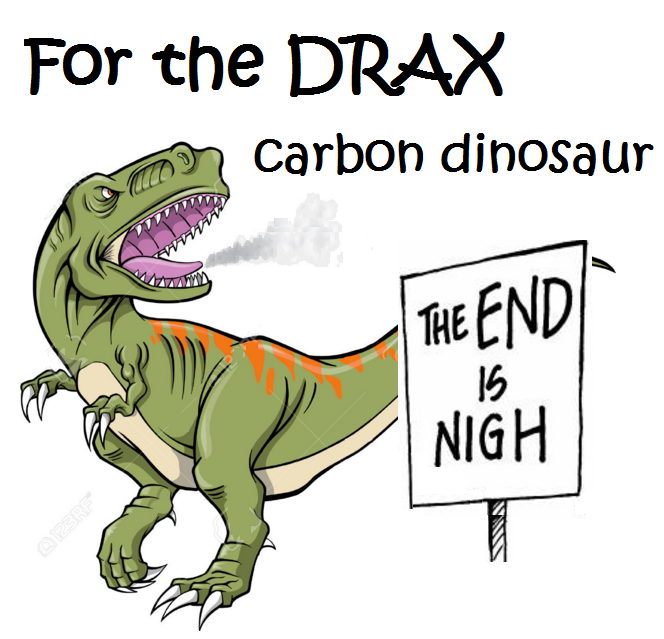 This is a guest post by Louise at Biofuelwatch.

Deep in the heart of north Yorkshire, near Selby, lives a giant dinosaur.  Not the kind with scales and wings, the kind that grumbles along, producing electricity fuelled by coal and biomass.  This dinosaur is called Drax, and it’s time has come.  As far as Biofuelwatch and the Coal Action Network are concerned, Wednesday 20th April is a noticeable date in the Time To #AxeDrax calendar.

There is a call from the southern United States to axe Drax too – they are sick of losing more and more of their precious, biodiverse, wetland forests every year as they are turned into pellets and fed into the mouth of the Draxosaurus.
There is a call from climate change campaigners who know that Drax emits more carbon emissions in the UK than anything that isn't an airport.

You are invited to the Axe Drax demo on Wed 20th April at the Grocers' Company, London, EC2R 8AD

So this blog post is an ask.  It’s an ask directly to you, the reader – forests, climate, and communities need your help.  Please diary Wednesday April 20th and come along to the #AxeDrax AGM demo at 11am in central London.

Biofuelwatch guarantee a lively fun protest, which is totally legal and fully inclusive.   The Axe Drax Facebook event is the perfect place for you to indulge a love of dinosaurs, or not…depending on your perspective.

You are very welcome to join Biofuelwatch supporters and friends at the Department of Energy & Climate Change after the demo too.  At around 1.30, Biofuelwatch friends and supporters are heading to DECC, (SW1A 2AW), to deliver our current petition to End Subsidies for Drax.  Please sign and share.

In 2015 Drax, the UK's biggest coal burner and the largest biomass power station in the world, received £451.8 million in ‘renewable energy’ subsidies, paid for mainly through our electricity bills.  Drax made a profit of £409 million in 2015.

This clearly demonstrates how dependent Drax is on government support, and how an end to subsidies would mean an end to Drax.

Drax burnt more wood last year than was produced in the whole of the UK, trashing forests throughout the southern US, and burned millions of tonnes of coal alongside it.  Drax PLC were paid £1.3million a day to generate electricity, and calling biomass ‘renewable energy’ & subsidising it simply has to stop.

Please come along to demonstrate with Biofuelwatch at the Drax PLC shareholder AGM on Wednesday April 20th at 11am.

Let’s undermine investor confidence.  Together we can AXE DRAX: NOT FORESTS, COMMUNITIES, OR THE CLIMATE! 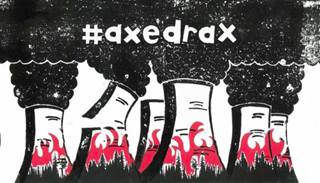